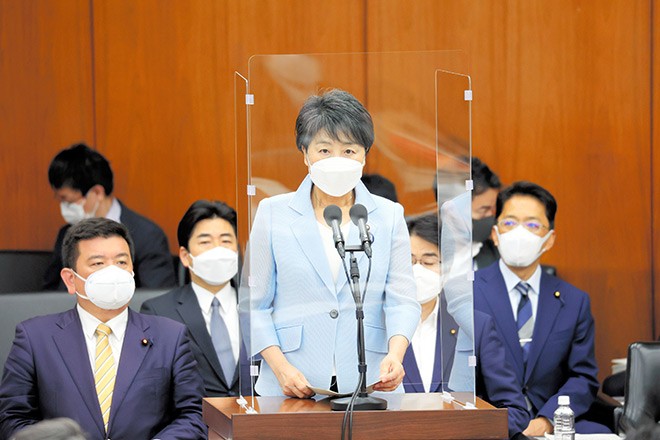 Yoko Kamikawa, who chairs the LDP strategy headquarters, explains a bill to protect people who star in pornographic movies and adult entertainment videos at a Lower House committee meeting on May 25. (Koichi Ueda)

Financial struggles forced one woman to star in more than 10 pornographic films for the first time when she was in her 40s.

She also wanted to “overcome the trauma” as a victim of multiple sexual assaults, she said.

The woman received 1 million yen ($7,400) per film and felt like she was a star on the set, she said. The money, however, did not give her what she had wanted.

A bill to make it easier for people who star in pornographic films and other “adult entertainment” movies to terminate their contracts and protect their privacy and health passed the Diet on June 15 with the approval at an Upper House plenary session.

Under the new law, people can terminate their contracts without any conditions for one year from the date a movie is made public, regardless of their age and gender.

They also can halt sales and distribution of a film.

The woman who once starred in more than 10 adult films said the new law “lacks details or specifics,” however.

“The central and local governments’ ‘safety net’ has not reached people who end up entering the adult video and other sex-related businesses, as well as prostitution,” she said.

There have been cases in which people are forced to sign a contract to star in such a movie.

Some people choose to do it because of poverty or sex crimes. The woman said she saw other women choose to star in such films because of financial difficulties.

She said she has never seen her films, nor has she told her husband about her secret past.

The private lives of such people can be negatively affected after the movie is put on the market and the people around them learn of its existence.

The new law, therefore, allows people to cancel a contract with no conditions for one year after the date a film is released, even if the contract has no problems.

People who create and distribute such videos will be required to prepare a contract document that clearly states the sexual activities to be filmed and mentions any possibility that an individual will likely be identified by starring in the film. They must then hand it to the cast member.

There has been debate over the pros and cons of performing sexual acts in exchange for money, triggered by the discussion of the bill.

The Upper House decided the issue will be discussed within the next two years.

The new law has two additional resolutions made by both the Upper and Lower houses.

The resolutions point out a need to establish an environment where people negatively affected by starring in such movies can seek guidance.

The new law also states the central and local governments will provide necessary support to solve the root problems, such as poverty and sexual violence, which force some people to appear in such films.

It remains unclear how the new law can save them, however.

The woman doubts if the law will be effective in solving various social problems such women face.

The law “doesn’t have concrete measures that address how to change reality,” she said.