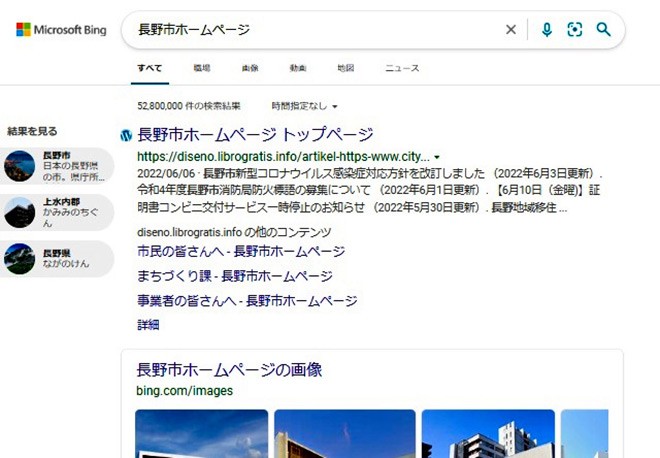 Municipalities are warning about fake websites pretending to be the official pages of local governments, some of which rank high in Microsoft Corp.’s Bing search engine and even unseat the actual sites in the rankings.

Tokushima city asked residents on June 9 not to visit a fake Web page imitating its official website because of the risk that citizens could be defrauded of their personal data.

According to a city official, the fake site appears high in Bing search results for “Tokushima-shi homepage” (Tokushima city website).

The official said the fake site looks almost identical to the actual one, except for its site address, adding that the city could not find its own official page in the search results.

The city had not received any reports of fraud related to the fake site as of June 13, according to the official.

“We asked the firm in charge of maintaining our website about what to do with the fake one, but we have yet to figure it out,” the official said. “For now, all we can do is urge residents to exercise caution.”

Other municipalities have also confirmed spoofs of their official websites. Aomori and Nagano cities are warning residents that their devices could be infected with computer viruses if they visit those fake sites.

He found that at least 18 of the cities’ official pages did not appear in Bing as they are supposed to as of June 10.

The 18 cities include Aomori, Nagano and Tokushima, as well as Fujisawa in Kanagawa Prefecture, and Ichinomiya in Aichi Prefecture, according to Tsuji. He said their number began surging in late May.

But he added that he had no problem searching their official pages when using Google LLC’s search engine.

But Bing has maintained a small share of the market.

An official from Microsoft Japan Co. told The Asahi Shimbun in an email that the company is aware of the fake pages ranking high in Bing results, adding that it is working to resolve the issue.

But the official declined to comment on the cause of the problem, the extent of the impact and possible countermeasures.