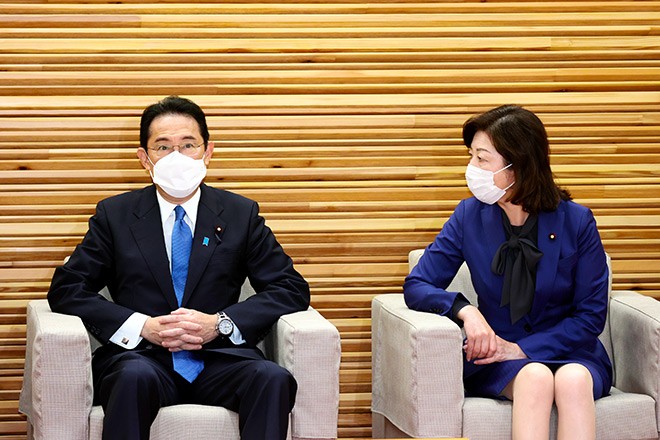 Prime Minister Fumio Kishida and Seiko Noda, the state minister in charge of gender equality, prepare to attend a Cabinet meeting at the prime minister’s office on June 10. (Koichi Ueda)

A postwar low of 514,000 marriages were registered in Japan in 2021, while around 50 percent of women and 70 percent of men in their 20s have no spouse or partner, a report showed.

More than a quarter of people in their 30s--25.4 percent of women and 26.5 percent of men--said in a survey that they have no wish to get married, according to the Cabinet Office’s 2022 white paper on gender equality released on June 14.

The white paper showed how attitudes toward marriage have changed since 1970, when 1.029 million couples were wed in Japan.

Many women in the latest report said they did not want to tie the knot because marriage could lead to additional burdens, “such as work, household chores, raising children and caring for elderly parents.”

Many men cited “unstable employment” or “a lack of earning power to maintain a married life.”

The white paper also pointed out that the COVID-19 pandemic “highlighted once again how Japan lags behind other countries on gender equality.”

Japan’s policies and systems that cause gender-related pay gaps, discriminatory working practices and other problems have “remained unchanged since the postwar period of rapid economic growth in the Showa Era (1926-1989).”

The report said, “Now that the idea behind the Japanese family has changed, marriage is no longer seen as a safety net to guarantee a stable life.”

To achieve gender equality in society, Japan needs to create an environment where women can become economically independent or receive career education when they are young, according to the white paper.

Seiko Noda, the state minister in charge of gender equality, said at a June 14 news conference that it is important to carefully resolve issues that are deterring people from getting married.

“Many unmarried men and women still said in the survey that they want to get married,” Noda said.

The white paper also revealed that the number of divorces has remained around one-third of the figure for marriages in and after 2020, the year the COVID-19 pandemic started.

The report also said the age when most deaths occur for women was 93 years and 88 years for men.

The number of single-person households is sharply rising because fewer people have been marrying and society is rapidly graying, according to the report.

The white paper calls for systems and policies to respond to these changes in lifestyles.