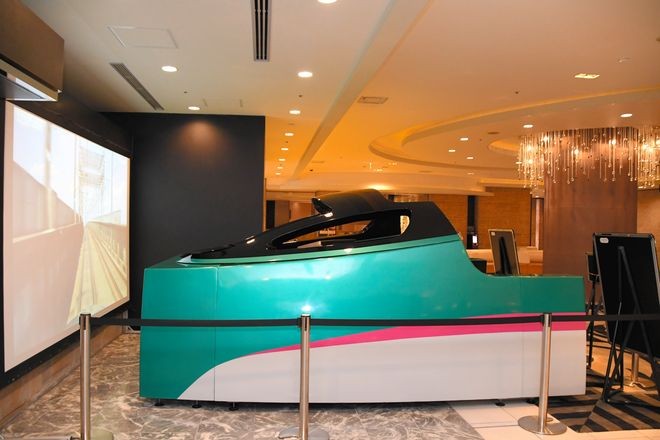 Urban hotels are allowing guests to fly airplanes, drive bullet trains and groom their pets in a bid to counter the dearth of visitors on leisure and business trips.

Some accommodation buildings have been completely revamped to bring in revenue sources during the COVID-19 pandemic.

The body of the train simulator is green and white with a pink line. It is installed in the center of the hotel lobby.

The screen shows actual footage shot from the driver’s cabin over about 30 kilometers between Oyama and Utsunomiya stations on the Tohoku Shinkansen Line.

The simulator was built in 2014 for the government to promote Shinkansen cars and the operation system to overseas markets.

It faithfully reproduces the subtle changes in speed on slopes, the delicate brake operations and other factors.

The hotel expected the simulator to attract train fans, but an increasing number of families with children have also been drawn to it.

“We want to inspire our guests to go traveling,” a representative said.

Centrair Hotel, which is directly connected to Chubu Centrair International Airport in Aichi Prefecture, started offering a stay at the ANA Room in autumn last year.

The room allows guests to use a light plane simulator while they watch real aircraft taking off from the runway.

A real flight recorder and engine parts are on display in the room, and guests can order room service for food similar to in-flight meals.

The Tokyo Bay Tokyu Hotel in Urayasu, Chiba Prefecture, collaborated with Japan Airlines Co. to replicate an airplane cabin in a guest room.

Available since late April, the Wing Room is equipped with seats, window frames taken from a retired Boeing 777 jet, and a meal cart.

The hotel is connected to Tokyo Disney Resort parks by shuttle bus, and park visitors account for 70 percent of its overnight stayers.

But the occupancy rate temporarily dropped to 20 percent due to restrictions imposed during the pandemic.

“Our problem was how to create another market when we were dependent on Disney,” said Hiroaki Iwamoto, general manager of the hotel.

According to the Japan Tourism Agency, overnight stayers in Japan decreased by 47.1 percent to 315 million in 2021 from two years earlier.

The spread of teleworking has led to a further decrease in business trips at hotels in urban areas, even as the pandemic appears to be settling down.

In February, Sumitomo Realty & Development Co. remodeled its hotel in Tokyo’s Shibakoen district to cater to guests with pet dogs.

The Inumo Shibakoen hotel features a dog run, a restaurant that serves meals to canines and a pet beauty salon.

The floors and walls are coated with resin and covered with tiles for easy cleaning.

The hotel operator, Sumitomo Fudosan Villa Fontaine Co., said it decided on the remodeling after its main customers, inbound tourists, disappeared during the pandemic.

“A certain number of inbound tourists is expected to return, but that doesn’t necessarily mean that 100 percent will come back,” said Toshiyuki Masui, the company president. “We need to keep developing ‘cutting-edge hotels’ to cater to specific interests and tastes.”

(This article was written by Go Takahashi and Shinya Matsumoto.)