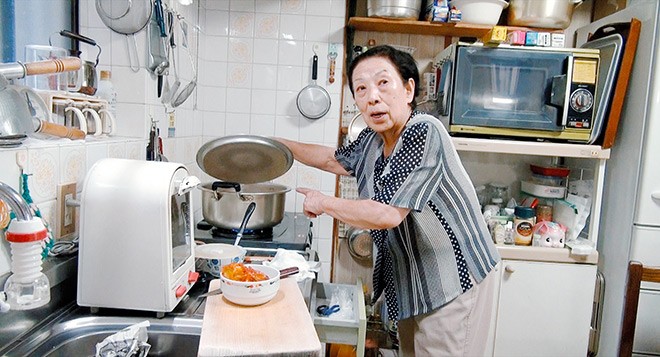 Kang Jong-hi, a native of the Korean island of Jeju, cooks a secret recipe soup, containing a stewed whole chicken, for Kaoru Arai, her daughter’s fiance, in “Soup and Ideology.” ((c) Place to Be, Yang Yong-hi)

OSAKA—“Soup and Ideology,” filmmaker Yang Yong-hi’s latest documentary, opens with her mother recounting ghastly sights she witnessed on the Korean island of Jeju in 1948 as a teenager.

“There were sounds of gunshots everywhere, like, ‘bang, bang!’” Kang Jong-hi is shown saying deliriously in a hospital bed in 2011. “Many mothers (women) of Jeju Island were killed.

“People were forcibly taken to a schoolyard and lined up all together, and machine guns went ‘rat-a-tat.’”

Kang, who died at 90 in January this year, was speaking about memories of the Jeju April 3 incident, which some call the biggest taboo in the history of South Korea.

The country’s military and police, among other parties, killed one in every five islanders when they suppressed an armed uprising that broke out on April 3, 1948, on the eve of the establishment of the South Korean government. The protesters were opposed to elections planned only in the southern part of the divided Korean Peninsula.

Yang, 57, a second-generation Korean resident in Japan, did not know Kang had survived the massacre on her native island.

“The April 3 incident has long remained a taboo in the community of ethnic Koreans in Japan as well,” she said. “I was surprised to learn that my mother had lived through the incident.”

Victims of the incident and their family members were stigmatized as “rioters” or “communists” until the South Korean government enacted a special law in 2000 for finding out the truth and restoring the victims’ honor.

“Soup and Ideology,” which began showing nationwide on June 11, constitutes a final chapter of Yang’s autobiographical “family saga” series following “Dear Pyongyang” (2005) and “Sona, the Other Myself” (2009).

Yang had no plans for a third film until Kang made the revelations in 2011.

She thought she was “no longer able to close the family saga.”

Yang, who was born and raised in Osaka’s Ikuno Ward, grew up under complicated family circumstances.

Her father was a senior official of the pro-Pyongyang General Association of Korean Residents in Japan (Chongryon). Kang was also a devoted activist.

Yang was the youngest of four siblings, but she was virtually the only child since she was in elementary school.

The sense of loss and an inner struggle prompted Yang to choose the career of a video artist and begin filming her family in 1995.

“Dear Pyongyang,” which portrays her family separated between Osaka and Pyongyang, won the NETPAC (Network for the Promotion of Asian Cinema) Award at the Berlin International Film Festival.

“Sona, the Other Myself” was also invited to screen at film festivals outside Japan.

While Kang’s accounts acted as inspiration for a new film, Yang thought a matter-of-fact account of the incident would not make for a movie that would attract many viewers.

In the summer of 2016, Kaoru Arai, Yang’s partner a dozen years her junior, visited Kang in a suit, dripping with sweat, to pay his respects to her ahead of the couple’s marriage.

Arai, now 45, was stiff with nerves, fearing he could be sent off with a ritual sprinkle of salt. But Kang entertained him with a secret recipe soup, which contained a stewed chicken stuffed with plenty of garlic.

“The scene was so funny that I thought I could make the movie with elements of comedy,” Yang said. “That set the filmmaking process in motion.”

A scene in the latter half of the film shows Yang and Arai visiting Jeju Island in April 2018 with Kang, who was in an advanced stage of dementia.

Yang had previously resented Kang for sending her three brothers to North Korea. But she changed her mind for the first time when she saw vestiges of the massacre.

“I don’t believe the April 3 incident alone was the driving force behind her support for North Korea, but I got a firsthand sense of why she had such a strong distrust of South Korea,” she said.

“The history of the Korean Peninsula and that of ethnic Koreans in Japan are so convoluted that the story of an individual needs a long preface,” she said. “I believe I took enough time making this film so it will dawn on viewers naturally that it is about members of Japanese society.”