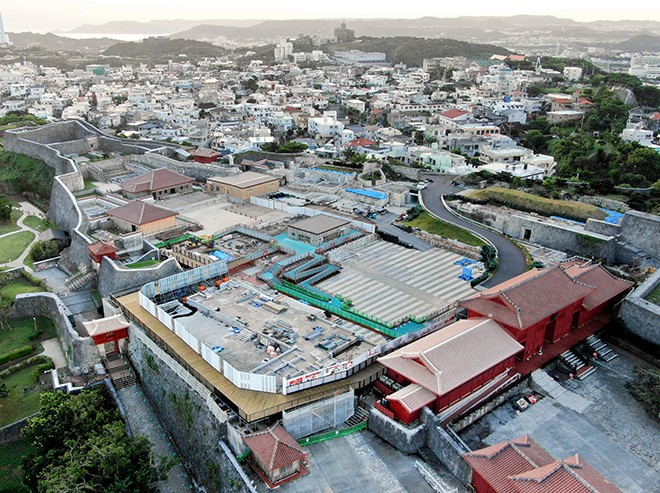 FUKUOKA--Toshiyuki Kono was distressed to watch Shuri-jo Castle in Okinawa Prefecture going up in flames in October 2019, only six months after a fire ravaged Notre-Dame in the French capital.

Kono, a distinguished professor of international heritage law at Kyushu University, orchestrated a team of Japanese and French experts and forged an online “exhibition” on the two World Cultural Heritage sites out of the twin tragedies.

The voluminous digital work, which opened in April, took what Kono described as the “choicest members currently conceivable” two full years to complete.

“The support of citizens is essential for the restoration of cultural heritage sites,” he said. “I hope our exhibition will serve as a platform for more in-depth understanding on the issue.”

The website displays about 350 pictures, including photos and images of ancient documents, along with short, exhibition-style explanatory notes in Japanese, French and English.

Visitors scroll down the screen to read materials on Shuri-jo in Naha, the capital of Okinawa Prefecture, arranged on the right and those on Notre-Dame de Paris Cathedral on the left.

They are invited to reflect on issues, such as how the two structures should be restored and what the genuine value of cultural heritage is.

It is followed by “rooms,” including one titled “The Loss,” which describes how they were burned down; “Permanence and Transformation,” which outlines the foregoing history of destructive events and restoration efforts; and “Emotions and Memories,” which summarizes the post-fire reactions of society.

Presented in the final section is the restoration work under way.

Kono was president of the International Council on Monuments and Sites (ICOMOS) at the time of the fires. The UNESCO advisory body is tasked with evaluating cultural properties to decide whether they should be recommended for inscription on the World Heritage list.

Kono has dealt with damage incurred by cultural heritage sites around the world, including the Syrian site of Palmyra, which was destroyed by an extremist group.

He believed that a reproduction of intangibles, such as techniques and uses, is essential in restoration work in addition to a return to the original appearance and shape. But such discussions were limited to expert circles, he said.

Kono was also concerned about moves that showed a lack of respect for the views of cultural property experts following the fire at Notre-Dame. For example, French President Emmanuel Macron immediately set a time limit for having the cathedral restored.

He made up his mind to organize an exhibition on Shuri-jo and Notre-Dame for communicating expert knowledge to the public in an easy-to-understand fashion.

Okinawans demonstrated a strong sense of loss about the destruction of Shuri-jo’s Seiden (State Hall), although it was, physically speaking, less than 30 years old.

“The two artifacts resonate with each other,” he thought at the time.

The coverage of the exhibition is not restricted to cultural and architectural aspects alone.

Among items on display are a letter the Paris Fire Brigade sent to the Naha City Fire Department on the day the fire broke out at Shuri-jo, a reply to that letter and the reaction of Okinawans who said Shuri-jo was a source of their emotional support.

When Kono asked French Gen. Jean-Louis Georgelin, the top executive overseeing Notre-Dame’s restoration, for approval, he took a French translation of “The Temple of the Golden Pavilion,” a Yukio Mishima novel centered around an arson at Kinkakuji temple in Kyoto.

The general gave Kono the green light and wished him good luck.

Kono gave up on the idea of holding an in-person exhibition, partly because of the novel coronavirus pandemic, and instead began working on the online version.

Under the framework of a joint Japanese-French research program, the experts gathered online several dozen times before the website (https://www.notredame-shurijo.com/index.shtml) opened.

The target year for restoration has been set at 2024 for Notre-Dame and 2026 for Shuri-jo’s State Hall. At both sites, the work is aimed at faithful restoration and is being well communicated to society, Kono said.

“We will leave our exhibition open to the public until the restoration work is officially declared complete at both sites,” he said.