The men who have become trapped by the war in Ukraine 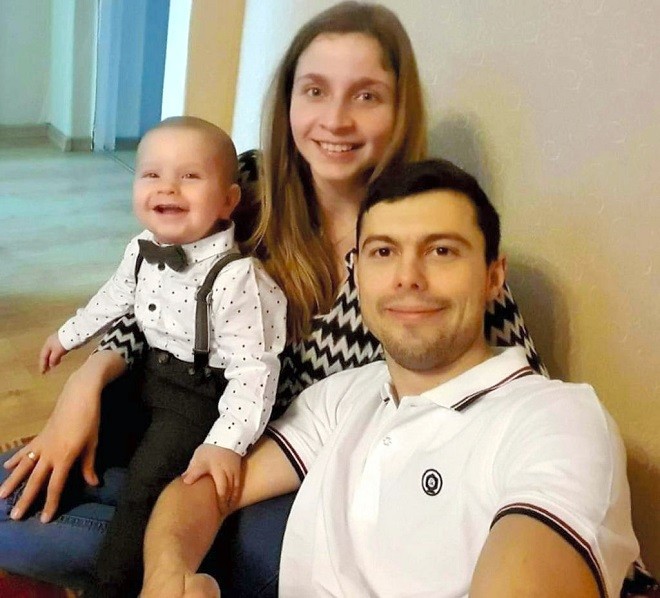 LVIV, Ukraine--When Oleksandr Diubanov returned to his home country of Ukraine on Feb. 20 from Latvia, where he has been working for the past three years, he did not expect to stay long.

He needed to take care of some paperwork so his 2-year-old son could continue to live in Latvia.

Four days later, Russia invaded. Soon after, his flight back to Latvia on Feb. 25 was canceled.

The Ukrainian government declared martial law and issued a decree on a general mobilization of the population, prohibiting men ages 18 to 60 from leaving the country for possible military service.

There are exceptions. Men raising three or more children and those raising children with disabilities are exempt.

But some Ukrainian civilians who returned to the country before the war broke out, including Diubanov, who is 30, were trapped. Others came back to volunteer to fight but cannot leave the country even after their stints are over.

This raises a fundamental question of to what extent people’s freedoms, including their mobility and freedom against taking up arms, can be restricted in a democracy fighting an aggressor.

Desperate to be reunited with his family, Diubanov spent 30 hours traveling by train and bus to reach a checkpoint at a border with Poland. He showed border service guards official papers produced in Latvia, including his employment contract, apartment lease and residence card.

He was turned away just two minutes later.

“They would not let me pass through no matter what documents I showed,” he said recently in an online interview. “They gave no consideration to my personal circumstances.”

Ever since, he has been waiting for the war to end while renting a cheap apartment in a village in the midwestern region of Vinnytsia.

His employer in Latvia notified him that his salary would be cut by 70 percent until June.

Diubanov conducts quality control inspections to monitor the kinds of chemicals used in furniture wood. He cannot do the job by teleworking from Ukraine.

What concerns him most now is the possibility that his employer may fire him after June. If that happens, his family’s residence cards would be revoked, making his wife and son illegal residents in Latvia. The residence permits are issued based on his employment status in Latvia.

Countless civilian men in and out of Ukraine have volunteered to fight as members of the country’s Territorial Defense Forces since Russia invaded.

But Diubanov said he has never fired a weapon in his life and has no intention of going to a war zone.

“Why do I have to stay in Ukraine?” he said in tears.

He is just one of many Ukrainians stuck in the war-torn country trying to leave.

Andrii, a 36-year-old who refused to give his last name, has been working for an information technology company in Florida for the past two years. He returned to Ukraine on Feb. 18 for a temporary visit as his father, who had lived in a Kyiv suburb, had died earlier that month.

When the exit ban was imposed, Andrii found himself stuck there and is now living in a friend’s apartment in Kyiv.

“You should fight as a soldier,” said one post. “Shame on you,” said another.

Still, thousands of people are questioning the ban, even though they know that speaking out against it will invite heavy criticism at a time when Ukraine is trying to enlist as many personnel as possible for the war effort.

OTHER WAYS TO CONTRIBUTE

In late May, Alexander Gumirov, a lawyer based in Odesa in southern Ukraine, submitted a petition to Ukrainian President Volodymyr Zelenskyy calling on him to lift the ban. It collected more than 27,000 signatures online.

“Not all men must hole up in a bunker with guns,” the literature for the signature-collecting campaign said.

Behind the extreme step of prohibiting men from leaving is the stark power imbalance between the Ukrainian forces and the Russian aggressors.

According to an estimate by the Military Balance report compiled by Britain’s International Institute for Strategic Studies, there were about 200,000 active members of the Ukrainian military in 2021, compared with Russia’s 900,000.

To help fill the gap, countless civilians have joined the Territorial Defense Forces to be deployed around the country at the urging of the Ukrainian government. Foreign volunteers from many corners of the world are also participating in the war.

But Gumirov, 42, said in an online interview that not all civilians are useful in the front lines, as they lack military experience.

He argued that there are other ways to contribute to Ukraine’s war effort instead of being sent to fight.

“They can build barricades or help in medical services or logistics, depending on their attributes,” he said. “Besides, fighting the war is extremely costly and therefore it is also important to let people work if they can earn money.”

According to local media, Zelenskyy blasted the plea.

“Can we show this petition to parents who lost their sons to defend the country?” he was quoted as saying.

One of the people who signed the petition was Oleksii, who returned from Poland in early March to fight. He drove to Ukraine with a friend who lived in Britain and took a leave of absence from his information technology company.

Oleksii, 28, declined to be fully identified for this article as he feared that he may run into trouble when he passes through the border.

Oleksii had volunteered in 2014 to fight against pro-Russian separatists in eastern Ukraine.

Upon his return, Oleksii signed a contract that said he can leave his unit anytime he wishes as he was not being paid to fight. He was sent to Irpin on the outskirts of Kyiv and elsewhere to guard military doctors and other personnel.

Oleksii said three people were killed over four hours since he arrived at a position one night in eastern Ukraine, where Russian forces were launching an offensive to seize the region.

He left the defensive force in early May, deciding it was time to return to his job.

His wife, a homemaker, and his 7-year-old son are in Poland, where they have lived for the past four years.

But with the ban in place, Oleksii is waiting for permission from the authorities to leave.

He noted there are two other possible ways for him to get out of Ukraine.

One is bribing border guards, a practice running rampant amid the chaos of the war. Men trying to flee Ukraine hand payments of cash equivalent to between $10,000 and $20,000 (1.3 million yen to 2.6 million yen) to individuals serving as intermediaries between them and border guards to let them pass through.

But he dismissed that option.

“I can afford to pay, but it is ridiculous,” he said.

The other scenario is that he could enter a Russian-controlled area in Ukraine, then travel to Russia before finally making his way to Georgia or elsewhere.

But he said that would be a longshot.

“I have volunteered to fight against Russia twice, so it is unlikely that the Russian military will let me pass through,” he said.

Oleksii said he came back to help secure “a free Ukraine,” but when he arrived, he was deprived of his freedom to leave and reunite with his family.

“I will not return to Ukraine again,” he said, “and will eventually abandon my Ukrainian citizenship.”