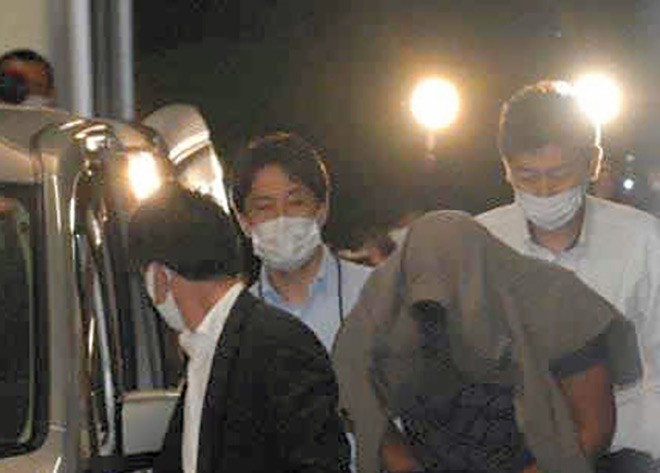 Daiki Matsue, who pulled a jacket over his head to avoid being photographed, was arrested on suspicion of fraud and is being taken to Mejiro Police Station in Tokyo’s Toshima Ward on June 13. (Soichi Tsuchidate)

The 17 people the Metropolitan Police Department charged for involvement in collecting some 200 million yen ($1.5 million) in fake COVID-19 subsidy applications were 29 or younger when the alleged crimes were committed.

The fraud was led by an investment group, and the young people, some still in high school, were lured into becoming accomplices in the scheme through social media, sources said.

A key tipoff in the case happened after a man found something unexpected in his mail.

In August 2020, a university freshman showed up at the Metropolitan Police Department’s Mejiro Police Station in Tokyo's Toshima Ward, accompanied by his father.

“My son seems to have falsely claimed a subsidy,” the father said.

The father said he had found a payment notice for a COVID-19 subsidy that was mailed to his son at home.

The subsidy is intended for business operators who suffered a year-on-year sales decrease under the pandemic.

There is no way his son is eligible, the father thought.

He told investigators that he was talked into the scheme by a person his own age he met through an after-school job.

Police followed the lead and eventually rounded up young people who had falsely applied for COVID-19 subsidies one after another.

Police then suspected that behind it all was a group that invests money in a cryptocurrency business called Mining Express.

The group used LINE to invite young people to file a false application with the prospect of investing the funds, sources said.

“If you make an investment based on the COVID-19 subsidy, it will be doubled,” one of the messages said. “If you become an investor, you are a sole proprietor. Therefore, it won’t be fraud.”

Soon after the subsidy system was launched, those who had participated started inviting other people so they could get a referral fee.

Police have arrested Daiki Matsue, 31, the alleged mastermind behind the fraud, along with eight other members of the group, including an employee of the National Tax Agency’s Tokyo Regional Taxation Bureau and a former employee of Daiwa Securities Co.

All 17 people were 29 or younger when they committed the crime, according to police sources.

“Young people tend to commit a crime when they can justify it,” said Nobuo Komiya, a criminology professor at Rissho University.

The fraud scheme “had all the conditions right for them to justify the crime,” he said.

They participated in the scheme around mid-summer of 2020, when Japan was in the grips of the pandemic.

Many young people were frustrated by the government's call to stay home and anti-virus restrictions that limited their school activities and after-school jobs.

Komiya said they were probably thinking something along the lines of: “We are also suffering under the pandemic. So, it should be OK to do this much.”

The youngest charged was 17. The average age of those who were charged was 29.7, police said.

Many of the young people were used as account holders to file applications for COVID-19 subsidies.

The trend “reveals the ways in which young people take part in crimes without careful consideration through (being recruited via) social media and elsewhere,” a senior official of the agency said.

(This article was compiled from reports by Ryo Oyama and senior staff writer Shinpachi Yoshida.)