New agency to unify children’s policies from poverty to abuse 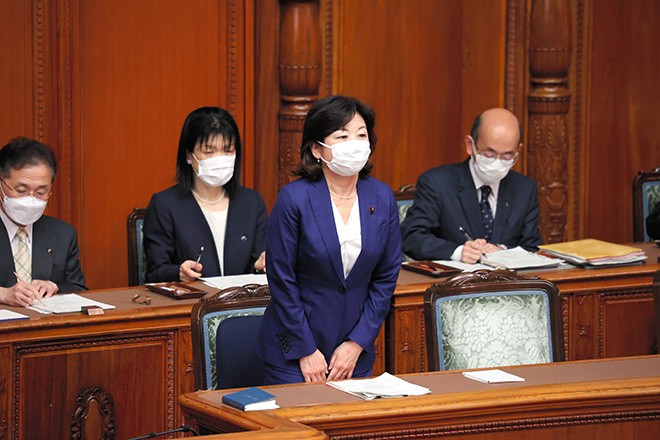 Seiko Noda, the state minister in charge of children’s policies, stands after a bill to establish the children and family agency is passed at the plenary session of the Upper House on June 15. (Koichi Ueda)

More than half the lawmakers present at the session, including those from the ruling and opposition parties, voted for the bill.

The new agency will be launched in April 2023.

It will be a central agency within the government for implementing children-related policies and be responsible for wide-ranging issues, such as supporting child-rearing, alleviating child poverty, helping to prevent child abuse and tackling the falling birthrate.

Departments responsible for child-related services at the health ministry and the Cabinet Office will be merged under the new agency.

The agency, which will be staffed with about 300 officials, will be solely responsible for these services.

The agency will also be in charge of preventing child sexual abuse, an issue the government has been slow to address because it has been unclear which department or agency should be responsible for it.

The new agency will consider introducing the Japanese DBS (Disclosure and Barring Service). The DBS is a system to prevent people with a history of child sexual offenses from working in education or child care.

The agency's establishment will also address the issue of the highly compartmentalized bureaucracy surrounding child-related services, to some extent.

However, the agency will not unify departments responsible for kindergartens and nurseries--an idea that some of the opposition parties had demanded.

The education ministry will continue to be responsible for kindergartens and compulsory education, while the health ministry will still oversee nurseries.

The number of child abuse cases that local child consultation centers responded to reached a record 205,000 in fiscal 2020.

In the same fiscal year, the number of elementary or junior high school students who refused to go to school, a phenomenon called “futoko,” was 196,000, another record.

Such grave situations involving children prompted the decision to establish the new agency.

Where the funding to execute the agency’s services will come from remains unclear, however.

Prime Minister Fumio Kishida has said at a Diet session that the government aims to double the budget for children-related policies in the future. However, he hasn’t made clear the target date for doing so or how the government would secure the funding.

On June 15, the Children's Basic Law was also enacted at the same plenary session of the Upper House.

With it, the government transposed the Convention on the Rights of the Child, which Japan ratified in 1994, into law.