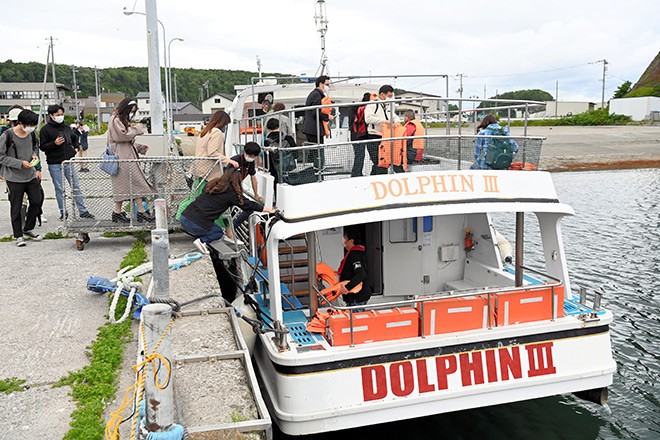 Passengers board a small sightseeing boat at Utoro Port in Shari, Hokkaido, on June 16. (Kengo Hiyoshi)

The transport ministry on June 16 revoked the Shiretoko Pleasure Boat’s license to operate--the first time it brought down its heaviest administrative disciplinary action against a passenger ship firm in response to an accident.

The move, which was widely expected, follows a fatal accident involving the company’s sightseeing boat the Kazu I, which sunk while carrying 26 passengers and crew members off Shiretoko Peninsula in Hokkaido. Twelve people remain unaccounted for.

The ministry also cited that the company has submitted a false report about the eligibility requirements for an operation control manager and it did not suspend its operations even though bad weather was expected.

“The fact that multitiered safety nets had been lost was a major cause of the serious accident and the subsequent spread of damage,” the ministry said.

The ministry has concluded that revoking the license is appropriate because the company is likely to cause another serious accident.

Ahead of the decision, the ministry held a hearing on June 14 to allow the company to make its case.

But its president, Seiichi Katsurada, did not attend the hearing.

Instead, he said in a submitted statement that the central government shares some responsibility for the accident and he objected to the license being revoked.

“It does not make any sense to say that Shiretoko Pleasure Boat is solely responsible (for the accident).”

The ministry examined the company’s statement but decided to revoke the license as planned.

The company will be unable to obtain a permit to operate for two years after the revocation.

It had caused two accidents in 2021, and the ministry conducted a special audit and short notice inspection afterward.

Still, it continued operating as normal and the high-profile accident occurred in late April.

Some have raised questions if the central government’s audit and inspection, as well as its follow-up, were sufficient.