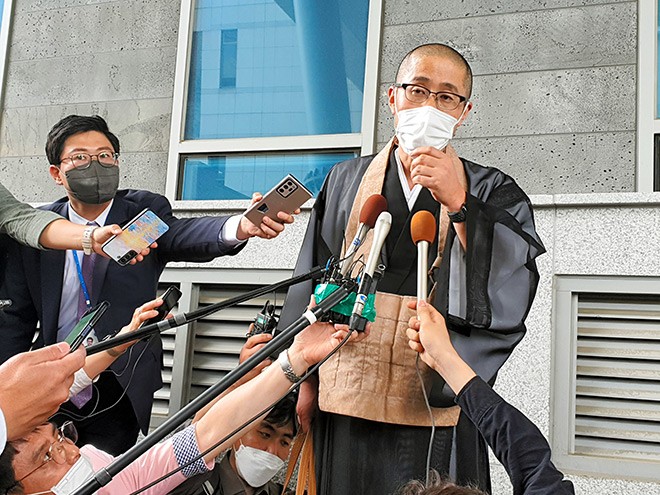 DAEJEON, South Korea--A Buddhist priest from Nagasaki Prefecture demanded the quick return of a statue stolen from his temple a decade ago and smuggled to South Korea in his first court appearance here in a lawsuit over the ownership rights.

“I’m hoping that the statue will be returned to us as soon as possible,” Setsuryo Tanaka, 46, chief priest of Kannonji temple in Tsushima, Nagasaki Prefecture, told the Daejeon High Court in South Korea on June 15.

The artifact in question, the seated statue of the Kanzeon Bodhisattva, is a designated tangible cultural property of Nagasaki Prefecture.

The statue became the center of a diplomatic controversy between Japan and South Korea after it was stolen in 2012 from Kannonji temple by South Korean burglars.

Those thieves were apprehended in 2013, and the statue was confiscated by the South Korean government. The temple and the Japanese government then requested the statue’s return.

But Buseok temple in Seosan, a city on the Korean Peninsula's western coast, filed a lawsuit with the Daejeon District Court, demanding that the South Korean government turn over the statue because it is the rightful owner.

The court ruled in favor of Buseok temple, which claimed Japanese "wako" pirates had stolen the statue in the 14th century. Wako is a name given to groups of Japanese pirates, who were active along the Chinese and Korean coasts around the 13th to 16th centuries.

Tanaka appeared in the June 15 court hearing at the request of Seoul.

“We should all remember that a group of thieves illegally smuggled the statue to South Korea in the first place,” he told the high court. “It clearly belongs to Kannonji temple.”

Tanaka argued that the plaintiff failed to provide enough evidence to prove its ownership of the statue.

He claimed that the statue was handed down to a Buddhist monk, who built Kannonji temple in 1526, upon his return to Tsushima a year after he traveled to the Korean Peninsula as legend has it.

Tanaka said the temple had long possessed the statue “peacefully and openly” and obtained ownership of the artifact after the period needed to acquire ownership had passed as stipulated in the Japanese and South Korean civil law.

The court is scheduled to hold the next hearing in August.

In its ruling issued in January 2017, the Daejeon District Court determined that the statue was made as an offering to Buseok temple around 1330 based on a piece of writing outlining the statue’s history that was found inside it.

The ruling also noted that a record indicates wako pirates attacked the Seosan region five times between 1352 and 1381 and that the statue itself has scorch marks on it.

The court concluded that it can reasonably assume that the statue ended up at Kannonji temple after it was stolen or looted.