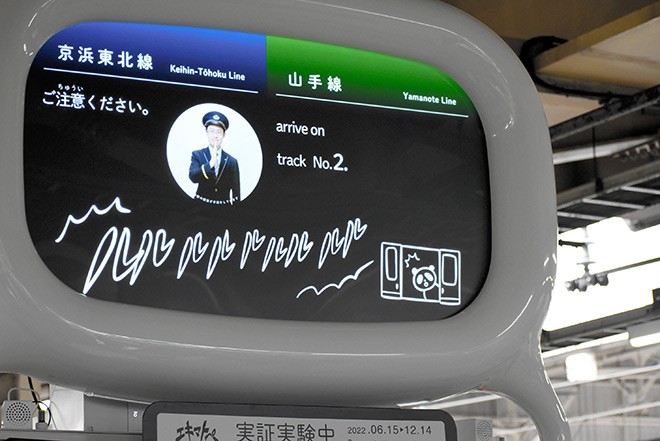 An experiment is under way at JR Ueno Station in Tokyo to create a safer environment for the hearing impaired by converting announcements and even the sound of an approaching train into printed matter or sign language.

The experiment, utilizing technology developed by Fujitsu Ltd., will continue until Dec. 14 with the cooperation of East Japan Railway Co., which operates the Keihin-Tohoku and Yamanote lines, among others, in the Tokyo area.

“I hope the technology will not only be convenient for those with hearing difficulties, but also lead to an experience at train stations for other passengers so their awareness about disabilities will change,” said Tatsuya Honda, the development team leader at Fujitsu.

A display about 1.7 meters wide was installed on top of a vending machine on the platform and messages are being displayed in conjunction with actual station announcements. Station employees also were shown using sign language.

Characters with an animation motif were used to represent the sound of an approaching train or the opening and closing of train doors.

According to Fujitsu employees who were involved in developing the technology, a microphone installed on the station platform picks up sounds and artificial intelligence is used to decide what information should be posted visually.

Routine announcements about the train doors closing on a certain platform are converted into messages.

The technology was developed after Fujitsu employees conducted a workshop in July 2021 for students at the Kawasaki municipal school for the hearing impaired.

Students who commuted by train asked for something that would turn sound into written characters as well as displays that showed sign language. Fujitsu had cooperated in the past with the school to develop products for those with hearing problems.

A three-day experiment was held last autumn at JR Sugamo Station, which prompted some people to suggest that the technology be installed at all train stations.

The experiment at Ueno Station is designed to further improve the effect and response of the technology so that it can someday be commercialized.

When no trains are approaching, the display shows sign language messages passing on information about activities of local groups who support the hearing impaired.