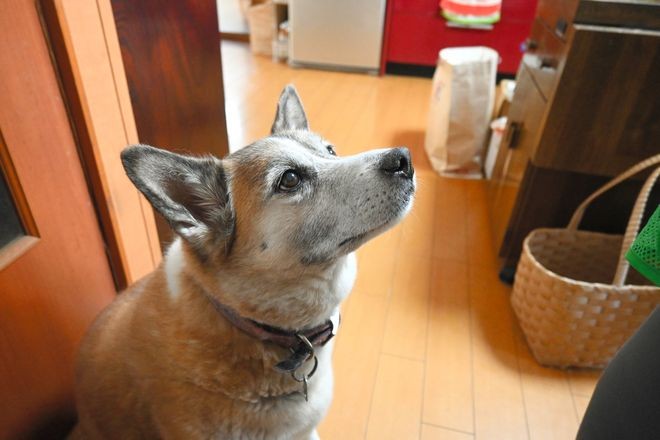 Ume-chan stares at her owner, Kayo Nakamura, in their home in Iizuka, Fukuoka Prefecture, on May 17. The dog won't leave her side and follows her everywhere. (Koki Furuhata)

The mixed-breed dog, presumed to be 14 years old, stands at an intersection with her owner to watch over the pupils.

It has been Ume-chan's custom for almost 10 years after she recovered from a traffic accident that occurred on a warm and sunny spring day 12 years ago.

At around noon that day, a stray dog was run over by a truck on a national road in front of the home of Kayo Nakamura, 75.

She went outside and picked up the young dog, but it appeared to have lost the use of its hind legs.

Her third-born daughter, Kozue Kuwano, 46, and others wrapped the dog in a bath towel and rushed to a nearby animal hospital.

But the doctor refused to help, saying that there was nothing that could be done.

As they rushed to another hospital in a car driven by her daughter, Nakamura held the dog on her lap in the backseat and kept telling the canine that it would be fine, but it gave no response.

When they walked into the examination room at the clinic, they were told that the dog might not be able to walk or stand again even after a surgery.

Its hip bones were shattered and both legs were broken.

The veterinarian also explained that it would cost about 500,000 yen ($3,700) to perform the surgery and cover other expenses.

The doctor even recommended euthanasia.

But Nakamura answered immediately without hesitation, telling the doctor to save the dog.

In fact, Nakamura had surgery for an acute heart attack and was saved from certain death several months prior, and she couldn't help but feel the urge to save the dog as long as it was still alive.

The surgery was completed successfully.

While the dog was hospitalized, Nakamura repeatedly visited the hospital, which was a 30-minute drive from her home.

She was allowed to see the dog, which was placed in a cage with a blanket and a water bowl, for about 10 minutes, crouching down beside the cage to talk to the animal.

After a while, the dog began licking her fingers through a gap in the cage, making her feel pleased.

The dog was released from the hospital one month later.

While driving back home, Nakamura stared at the dog, which stared back as it sat on her lap.

She named the canine "Ume-chan" after the ume plum because she met her in the spring.

Ume-chan followed Nakamura everywhere, walking with a limp. But she became able to walk properly in less than a year.

Every time Nakamura went out to serve as a volunteer worker for traffic safety activities in the neighborhood, Ume-chan barked at her from the veranda as if she was begging her owner to take her along.

About three years after the accident, it became Nakamura and Ume-chan's routine to stand at an intersection on a school route to an elementary school near their home.

Day after day, the dog watches over children on their way to school, wagging her tail in response to their greeting, "Good morning, Ume-chan!"