Kanazawa in push to promote its teahouse, geisha cultures 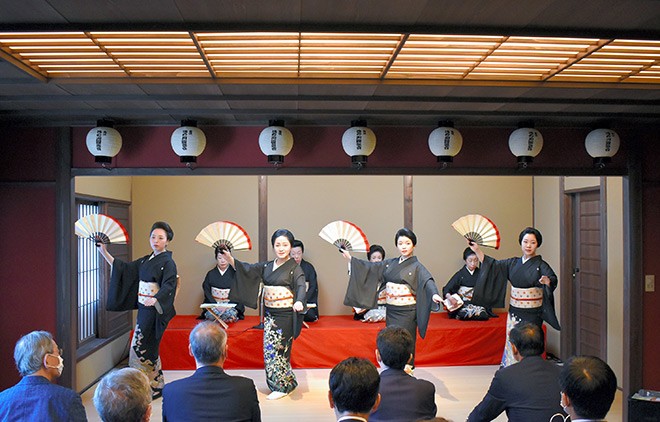 Geigi (geisha) perform a dance onstage to celebrate the opening of the Kanazawa Asanogawa Enyukaikan hall in Kanazawa on May 21. (Michiyo Sato)

KANAZAWA--Authorities here have mounted a campaign to lure back tourists in the post-pandemic era by celebrating the charms of the Ishikawa prefectural capital’s local history and geisha, known as “geigi.”

The private facility is aimed at introducing the culture of teahouse districts to tourists and local residents through live performances of traditional performing arts and exhibits.

It was remodeled from a traditional “machiya” narrow townhouse built on a 330-square-meter plot in the early years of the Showa Era (1926-1989).

The executive committee for “enyukai” geigi parties and other events played a major role in implementing the project.

The committee is a volunteer group comprising local business operators and residents dedicated to community development efforts. It has been active for many years.

The hall is equipped with a large 18-tatami mat room and a stage on the second floor for use by geigi to rehearse and present their performances.

The first floor and a separate “kura” storehouse are used as exhibition areas to pass on traditional performing arts and food culture. Panels and other exhibits on display trace the history of enyukai that started 35 years ago, as well as the Higashi and Kazuemachi teahouse districts.

“We hope visitors to the teahouse districts will drop by at this hall and be exposed to the charms of the Asanogawa district and its surrounding areas,” said Takeshi Nakamura, 79, head of the executive committee.

It is closed on Wednesdays and the year-end and New Year holidays.