Lisa’s Wanderings Around Japan/Ise Jingu: Finding divine grace along with hospitality at a grand shrine 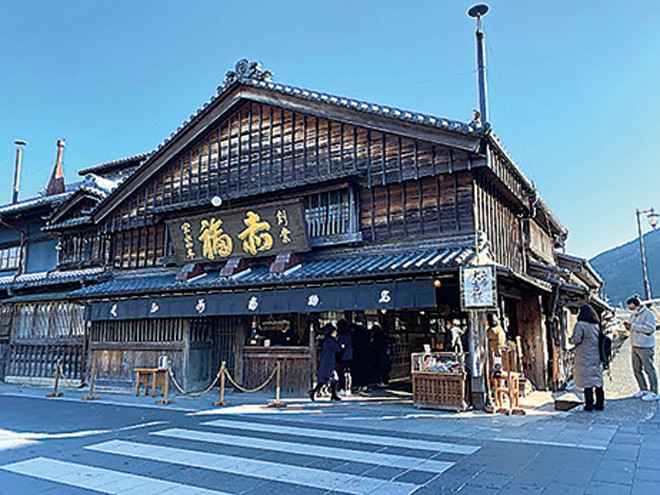 Akafuku in Okage-yokocho is a famous Japanese sweets shop with a history dating back 300 years. Visitors can eat the Ise Jingu-area specialty akafuku mochi — a pounded rice cake confection topped with a sweet bean paste. (Photo by Lisa Vogt)

"At least once, I’d like to make the pilgrimage to the Ise Grand Shrine.”

From around the 12th century, commoners young and old alike longed to make the once-in-a-lifetime visit to pay their respects to Amaterasu, Japan’s great ancestral deity, enshrined at what one might call Japan’s shrine of all shrines.

Ise Grand Shrine, in the city of Ise in Mie Prefecture and otherwise often referred to as Ise Jingu, is home to 125 shrines collectively known as the Jingu.

One enters the Jingu by crossing the Uji Bridge over Isuzugawa, a sacred river about 20 kilometers long that flows through the Jingu’s Naiku Inner Shrine. “Isuzu,” as in “Isuzu Motors”? Yes, this is where the company got its name.

Around the winter solstice, the sun rises magnificently behind the torii gate at the bridge. It’s cold and dark in the winter, but witnessing the breathtaking sight is a must. After all, sunrise is a sacred time of day for this place because Ise Jingu enshrines the goddess of the sun.

Upon this symbolic crossing of the bridge to “the other side,” I expected to find a Shinto water ablution pavilion with a bamboo "hishaku" dipper and a "temizusha" with running water where visitors wash their hands and rinse their mouths to perform a "misogi" purification ritual.

To my surprise, people squatted at the banks of Isuzugawa and purified themselves with the streaming water! (Later, there was also a “proper” facility.)

Just a reminder, folks: The front shrine, Shogu, is not a place to pray for personal wishes but to express gratitude for daily life. After paying your respects here, go to other shrines for more personalized “services” that address your needs.

After spiritual matters have been taken care of, enjoy a stroll around Oharai-machi (“purification town”) and stop by Okage-yokocho (“blessing alley”), which is filled with quaint shops and street-side stalls that take visitors back to the 19th century and beyond. The theme of the town is "shinon kansha" (神恩感謝), or “divine grace and gratitude.”

In the past, making the pilgrimage to Ise Jingu was arduous. It was common for people to get lost along the way, robbed or even kidnapped. During the Edo Period (1603-1867), the Tokugawa Shogunate’s permission was required to leave one’s home area--you needed to obtain a "tsukoutegata" passport, prepare food and money and secure lodging.

Once there, exhausted pilgrims were met with "omotenashi," or “openheartedness and hospitality.” The etymology of “host” is to receive guests with openheartedness, as found in “hospitality,” “hostel,” “host” and “hospice.”

I love the spirit of "okagesama," or “Thanks to you.” We exist because there is water, the sun, our ancestors and food grown by people whose faces we do not know. A pilgrimage to Ise Jingu and its environs rekindles deep shinon kansha in us all.

This article by Lisa Vogt, a Washington-born and Tokyo-based photographer, originally appeared in the May 22 issue of Asahi Weekly. It is part of the series "Lisa’s Wanderings Around Japan," which depicts various places across the country through the perspective of the author, a professor at Meiji University.