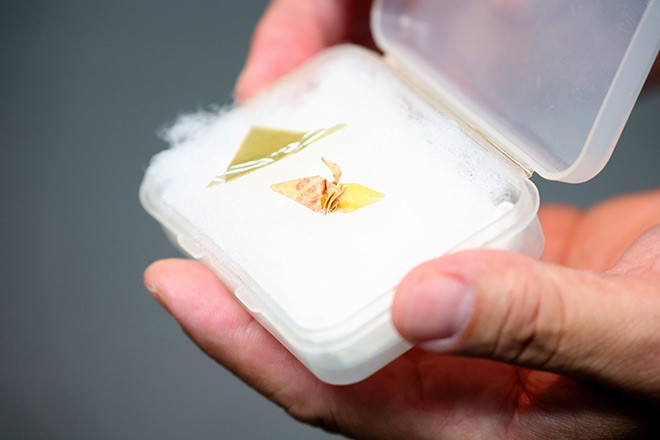 A paper crane folded by Sadako Sasaki. Her nephew, Yuji Sasaki, plans to create metal replicas of the crane through a 3-D scanner to present world leaders who will attend the Group of Seven summit in Hiroshima next year. (Koichi Ueda)

A nephew of atomic bomb victim Sadako Sasaki is hoping to present replicas of a crane the dying girl folded to world leaders at the Group of Seven summit in Hiroshima next year.

Yuji Sasaki, 52, met with Prime Minister Fumio Kishida at the prime minister's office on June 16 to share his wishes and present him a metal replica that he is thinking about giving to the leaders as well.

In reply, Kishida said he will consider the idea, according to Yuji.

Kishida represents a constituency in Hiroshima and picked the city to host the summit in 2023.

Sadako died of leukemia at the age of 12 in 1955. As she fought the disease at a hospital, she folded countless paper cranes to wish for her recovery using medicine wrapping paper and other materials.

She later became a symbol of peace and a model of the Children’s Peace Monument at the Hiroshima Peace Memorial Park.

“My aunt’s crane has been given a new lease on life in the form of a metal replica, so I am hoping that her longing for peace will be shared across the world,” Yuji said.