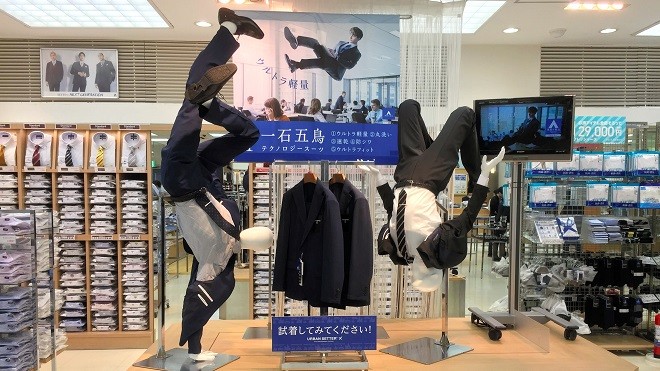 Mannequins at an outlet of Aoyama Tailor (Provided by Aoyama Trading Co.)

Mannequins doing one-arm handstands, frozen in backflips and wearing no pants represent a shift to a more casual look in the men’s clothing industry.

Sales of suits and other formal clothing for men have plummeted, particularly with the spread of teleworking and other diversifying work styles during the COVID-19 pandemic.

Men’s suit companies are now pitching clothes with an emphasis on flexibility and comfortableness to win over younger consumers and women.

Based in Fukuyama, Hiroshima Prefecture, Aoyama Trading Co., the largest formal menswear shop chain in Japan, said the idea of having mannequins strike unique poses at one of its Aoyama Tailor outlets was suggested to show off the lightness and functionality of the company’s products.

Photos of the mannequins went viral on social media.

An internal affairs ministry’s survey on family income and expenditures showed that households with two or more people spent on average 2,721 yen ($20) for suits in 2021, one-third of the spending of 20 years earlier.

“A dramatic paradigm shift has transpired,” said Akihiro Aoki, president of Yokohama-based Aoki Holdings Inc., operator of Aoki suit shops. “People’s lifestyle after the novel coronavirus outbreak is totally different from that before the pandemic.”

His remark came at an event in late April to announce the company’s new business strategy.

The company expects demand to grow for office clothes that can double as everyday garments, given that the practice of remote work has become broadly accepted and people are venturing out less often for business meetings and trips.

In November 2020, Aoki Holdings marketed its Pajama Suit characterized by the comfortableness typical of nightwear and the rigid impression of formal jackets.

The offering proved a hit, with 100,000 units sold by March this year. A pair of Pajama Shoes has been released under the same line.

Aoki Holdings plans to expand its casual products department more than threefold within three years or so. The Pajama Suit is regarded as a pillar to achieve the goal.

The company’s fashionable article division will be reconfigured so that business wear will account for 40 percent, of the section while women’s garments and casual clothes will each make up 30 percent.

“We will cast off the conventional business model to change,” President Aoki said.

A jacket-trousers set carries an affordable price tag of less than 10,000 yen. Zero Pressure Suit became so popular that it was temporarily in short supply.

Haruyama Holdings Inc. in Okayama, which runs Haruyama clothing shops, put out Ractive Suit, emphasizing its airiness and ease to maintain. It was developed under the theme of “‘raku’ (comfortable) and active.”

Konaka Co. based in Yokohama has made available a similar product named Ultra Work Suit.

Buoyed by strong sales of those casual garments, the companies’ business results improved in fiscal 2021 from the previous year.

Demand for suits dwindled in fiscal 2020 as Coming-of-Age events and entrance ceremonies at schools and companies were canceled due to the pandemic.

Aoyama Trading’s business-wear section, which makes up 70 percent of the company’s total sales, went into the black for the first time in two years for the fiscal year ending in March 2022. It posted its first net profit in three years.

Aoki Holdings also reported a net profit for the same period, according to financial data.

Haruyama Holdings has forecast a net profit of 200 million yen for the business year ending in March 2023.

For fiscal 2021, its net loss worsened from the previous year because of costs to shut down unprofitable outlets.

All businesses in the industry said they are aware the market environment may never return to what it was before the pandemic.

In addition to targeting younger generations and female consumers with casual clothing, they are trying to increase their presence in new fields, including tailor-made suits that require smaller stocks and lead customers to spend more money.