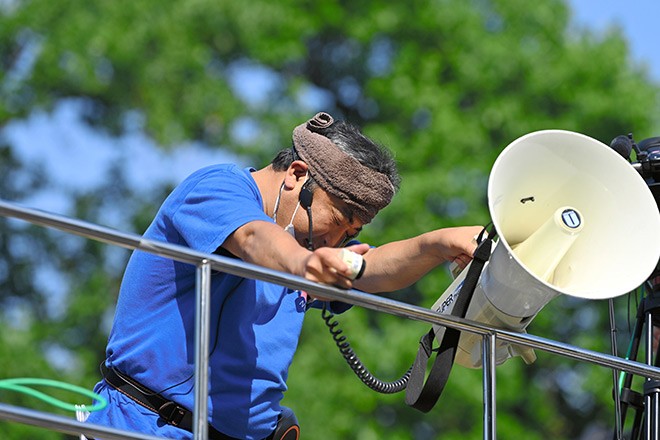 A plaintiff reacts in Tokyo on June 17 after the Supreme Court exempted the central government from liability to pay compensation to evacuees of the 2011 Fukushima nuclear disaster. (The Asahi Shimbun)

The Supreme Court apparently does not accept that the government has a responsibility to do everything possible to prevent a nuclear accident that could cause irreparable harm not only to human life and health but also to the environment.

A June 17 ruling by the top court on the government’s liability to pay compensation for evacuees of the 2011 Fukushima nuclear disaster would have been different if it had been based on that recognition.

The decision is also questionable from the viewpoint of the judiciary’s role of monitoring the administrative branch for any abuse of authority or negligence of responsibility on behalf of the public.

In a ruling that covers lawsuits filed in district courts in four prefectures, the Supreme Court decided that the central government was not obligated to pay compensation to those who fled from their homes following the triple meltdown at the Fukushima No. 1 nuclear power plant.

Nine years before the disaster, the Headquarters for Earthquake Research Promotion pointed out that a tsunami could be triggered by an earthquake off Fukushima near the Japan Trench, which lies east of mainland Japan.

Given that the tsunami generated by the magnitude-9.0 Great East Japan Earthquake was far bigger than predicted by the government agency, the top court concluded, the accident could not have been averted even if the government had ordered Tokyo Electric Power Co. (TEPCO), the operator of the stricken plant, to take steps to protect the facility.

But is that really the case?

Some high court rulings on the lawsuits filed by Fukushima evacuees took note of the high likelihood a loss of power that precipitated the triple meltdown could have been prevented if vital facilities, including the turbine buildings, had been made watertight, in addition to building a seawall.

The Supreme Court, however, said no in-depth discussions were held on anti-tsunami measures other than the seawall and that there had been no actual case of resorting to such measures.

But nuclear plants in and outside Japan had undertaken such work to make key facilities waterproof, at least to some extent.

If there were no discussions on such measures, the court should have assessed whether there should have been.

Nuclear plant operators and nuclear safety regulators have an obligation to take all possible protective steps based on the latest scientific knowledge and the principle of safety first to be prepared for any eventuality.

The Supreme Court ruling could be interpreted to endorse the disturbing notion that all the players responsible for the safety of a nuclear plant can cut costs without being held liable for accidents if they stick to conventional ideas and measures concerning nuclear safety.

He said it was quite possible to make vital facilities watertight and criticized the central government for acknowledging TEPCO’s failure to take effective safety measures.

Miura contended there is good reason to believe the accident could have been prevented if both the government and TEPCO had given serious consideration to the possibility of a tsunami, as pointed out by the agency, in accordance with the law and prevailing regulations at the time.

He said the government should not be exempted from liability on grounds an unexpected event occurred. This dissenting opinion is perfectly reasonable.

Even though the central government was not held liable for compensation, it cannot ignore its social responsibility for the tremendous damage caused by the accident.

The Supreme Court has already settled the issue of compensation for thousands of people forced to evacuate from their homes in the aftermath of the disaster by ordering TEPCO to pay a higher amount of damages than the standard set by the government’s committee overseeing compensation for victims.

The existing guidelines for payouts should be revised in line with this realty.

After the accident, the government created a system to provide funds to TEPCO for compensation and collect the money over decades from TEPCO and other utilities.

The program was justified as a system for “mutual aid among nuclear plant operators.” But it has been criticized for being based on distorted logic created after the accident to justify the program.

In a supplementary opinion to the Supreme Court ruling, Presiding Justice Hiroyuki Kanno noted that nuclear power generation was promoted by the government as a national policy.

“In case of a large-scale nuclear disaster, the central government should in principle take the principal responsibility for providing relief to victims irrespective of whether it is liable for negligence,” Kanno said.

Fresh debate is needed on how the government and plant operators should share the burden of compensation.

This is not the only issue that should be addressed.

A wide range of Fukushima-related challenges need to be tackled, including the decontamination of radioactive materials, the decommissioning of crippled reactors, the reconstruction of affected areas and the rebuilding of people’s livelihoods.

The government should not be oblivious to its responsibility to deal with these challenges.

NO RETURN TO PRE-DISASTER ERA

The court cases on compensation for evacuees underscored afresh the collusive relationship between major electric power companies and the government.

Miura said the now-defunct Nuclear and Industrial Safety Agency was “by no means committed to making its own efforts to acquire the latest scientific knowledge to fulfill its responsibility.”

“There was effectively no institution responsible for exercising regulatory authority,” he said.

In response to the accident, a more independent Nuclear Regulation Authority (NRA) was established, while a legal 40-year-limit to the operational life of nuclear power plants was introduced.

Critics complain the NRA’s safety screening is too rigorous. But neither nuclear regulators nor operators should be allowed to return to the ways that formerly held sway.

Calls are growing for expanding nuclear power generation as a means to secure a stable supply of electricity in light of the global energy crunch caused by the war in Ukraine while reducing the nation’s carbon footprint.

Electricity generated at an existing nuclear plant is relatively cheap, and nuclear power generation does not emit greenhouse gases.

But nuclear power generation faces some fundamentally difficult problems, such as how to deal with radioactive waste and damage resulting from a severe accident.

The government has kept trying to avoid its responsibility for ensuring the safety of nuclear plants.

It has, for instance, left decisions on whether to restart offline reactors entirely to the NRA and the local governments involved.

Calling for a revival of nuclear power generation without solving these problems is tantamount to a return to the system of irresponsibility that existed prior to the disaster.

On March 11, 2011, the devastating nuclear accident horrified not just Japan but the entire world.

The nation needs to have a straightforward debate on the role of nuclear power generation and the future of energy while recalling the pledges made at that time as well as the predicament of the victims.