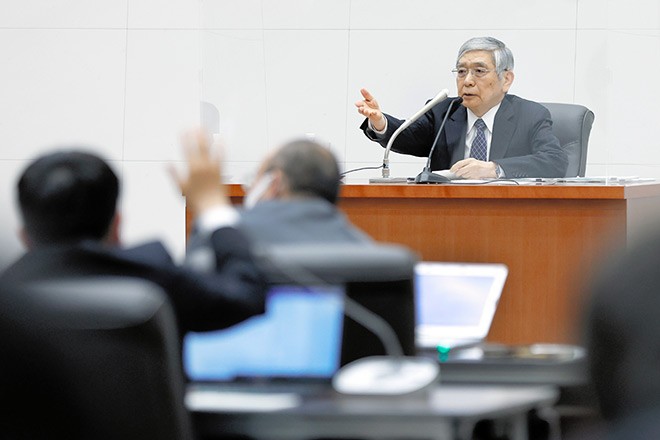 Bank of Japan Governor Haruhiko Kuroda finally conceded after stinging criticism that the weak yen was bad for the domestic economy, yet the central bank had no choice but to maintain its loose monetary policy to shore up the economy.

Speaking at a June 17 news conference after the BOJ completed a two-day monetary policy meeting, Kuroda stated: “The sharp slide in the yen creates huge uncertainties for companies trying to compile their business plans and is not desirable. It will have a negative effect on the economy.”

Kuroda had long insisted a weak yen was beneficial to the overall Japanese economy.

But not only did he backtrack on those past comments made at news conferences, but the BOJ also included wording in its statement released June 17 that said there was “a need to pay close attention to trends in the monetary and foreign exchange markets as well as its effects on the economy and consumer prices.”

The change in stance is in response to growing criticism that the BOJ’s low interest rates led investors to sell off yen and buy dollars, especially after the U.S. Federal Reserve Board began raising its interest rates.

The value of the yen against the greenback has fallen by about 20 yen since March, resulting in correspondingly higher prices for imports. That, along with higher petroleum prices due to Russia’s invasion of Ukraine, has not only hurt the pocketbooks of consumers but is also impacting small businesses without overseas assets.

Analysts said there was a possibility the weak yen trend would continue.

Mari Iwashita, chief economist at Daiwa Securities Co., said the yen would plunge beyond 140 yen to the dollar if the BOJ continues to do nothing, especially as other central banks are contemplating further hikes in interest rates.

At his news conference, Kuroda called for a continuation of the loose monetary policy to support the Japanese economy battered by the COVID-19 pandemic. He said it was unlikely the BOJ would revise its monetary policy in the short term.