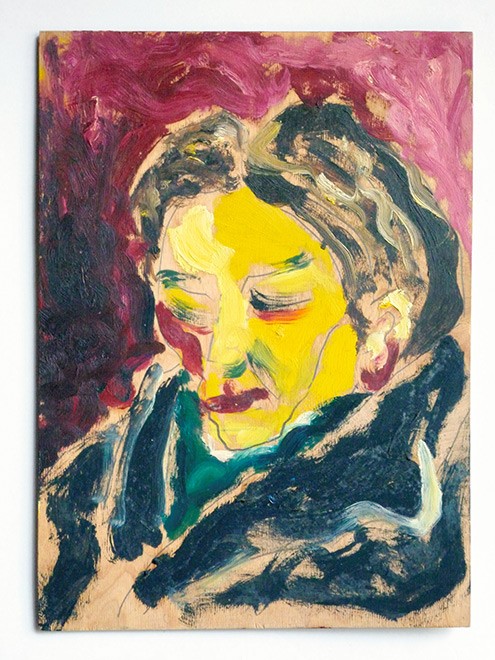 A portrait drawn by Osamu Dazai is being shown to the public for the first time. (Provided by the Mitaka city government)

A portrait drawn by literary giant Osamu Dazai (1909-1948) has gone on display for the first time since it was created more than 70 years ago.

It is being exhibited at the Mitaka City Gallery of Art in western Tokyo until July 24.

Executed in purple, navy blue and other dark colors on a sketch board measuring 33.2 centimeters by 24 cm, the painting depicts an individual whose eyes are closed.

It is impossible to tell whether the person is male or female, young or old. The identity of the model is also unknown.

There was question about whether the portrait was indeed drawn by Dazai because it lacks an inscription on the back or an artist’s signature. But an expert commissioned by the city government concluded that it must have been drawn by the novelist.

Dazai spent his last years in the city of Mitaka and frequented the atelier of painter Hamae Sakurai (1908-2007) in the neighborhood to draw.

According to the city government, nine paintings were confirmed to have been drawn by Dazai, but it is thought he created many more.

The portrait had been in the possession of Tatsu Ishii (1923-1964), an editor in charge of Dazai’s “No Longer Human” and other works. But he died without providing details about the piece.

His family members kept the painting in a box because they were not certain whether it was drawn by Dazai.

They began considering donating the portrait to the city government after they visited the Mitaka City Gallery of Art in 2018, when Dazai’s nine paintings were exhibited.

When city officials got an art expert to assess the portrait, they learned it was created in 1947 or 1948.

Oil-based materials, which were rare at the time, were used as in Dazai’s other works. The portrait also shared other similarities, such as the size of the sketch board and bold brush strokes.

The expert determined it was drawn by Dazai. The decisive factor was that it had been kept by Ishii.