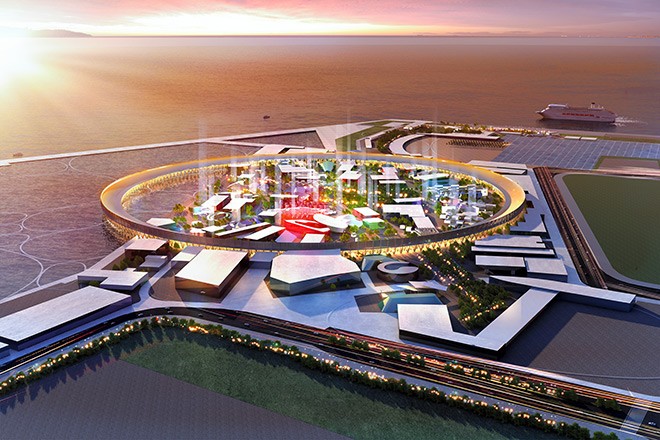 An artist’s rendering of the Expo 2025 Osaka, Kansai, Japan to be held in Osaka (Provided by the Japan Association for the 2025 World Exposition)

Organizers of the EXPO 2025 Osaka, Kansai, Japan plan to charge 6,000 yen ($44) per adult for admission, up 20 percent from its initial estimate, according to sources.

The Japan Association for the 2025 World Exposition wants the increase to ensure there are sufficient funds to cover the cost of operating the six-month event if visitor numbers do not reach the envisaged target.

The association’s initial goal was 28.2 million visitors. But it is in the middle of reviewing the number.

A final decision on price will be set by the year-end after the central government assesses the association’s closing proposal that is intended to reflect input from experts.

The adult ticket price for the 2005 expo Aichi, Japan was 4,600 yen. The increase factors in higher costs for goods and a hike in the consumption tax rate.

Association officials decided that if people were required to shell out more than 6,000 yen, it could result in a drop in visitor numbers.

On the other hand, officials felt that if the price was set at 5,500 yen or lower, the expo site could become too crowded.

Admission will be free for children up to the age of 3 and for people aged 80 or older.

The association plans to begin selling tickets in July 2023.

The price will drop to 3,300 yen during the period after the April 2025 opening until the end of the Golden Week holiday period in early May, when hordes of visitors are not expected.

The expo will open at Yumeshima man-made island off Osaka on April 13 and run until Oct. 13.

About 120 countries and territories, as well as seven international organizations, have announced they will participate.

Bandai Namco Holdings Inc., one of a number of businesses that will take part in the expo, is expected to set up a pavilion themed under the popular anime Mobile Suit Gundam.