Strong quake rattles the Noto Peninsula and nearby areas 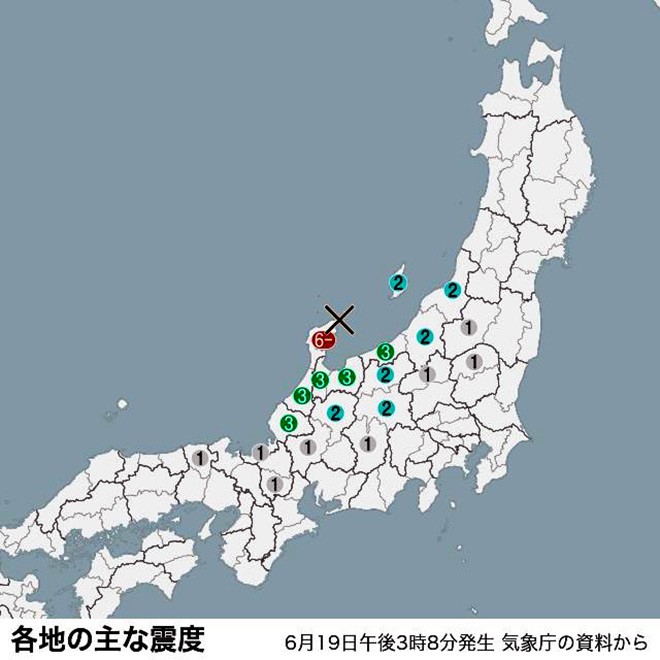 Numbers show the intensity on the Japanese scale of 1 to 7 of the earthquake that struck Ishikawa Prefecture and other areas on June 19. (From the Japan Meteorological Agency’s website)

A powerful earthquake jolted the Noto Peninsula in Ishikawa Prefecture facing Sea of Japan, as well as other prefectures, in the afternoon of June 19.

The Japan Meteorological Agency said no tsunami warnings were issued for the quake, which had a preliminary magnitude of 5.2 and struck at 3:08 p.m. Its focus was about 10 kilometers below the surface of the peninsula, the agency added.

The temblor registered lower 6 on the Japanese seismic intensity scale of 7 in Suzu, lower 5 in Noto and 4 in Wajima. All three areas are in Ishikawa Prefecture.

Shaking was also recorded in nearby Niigata, Toyama and Fukui prefectures.

Prime Minister Fumio Kishida told reporters he had been informed by Hokuriku Electric Power Co. that the quake caused no damage to its Shika nuclear plant and other nuclear facilities in Ishikawa Prefecture.

The Noto Peninsula has been hit by numerous temblors since late 2020. The agency said it had recorded more than 150 earthquakes with an intensity of 1 or higher since January 2021.