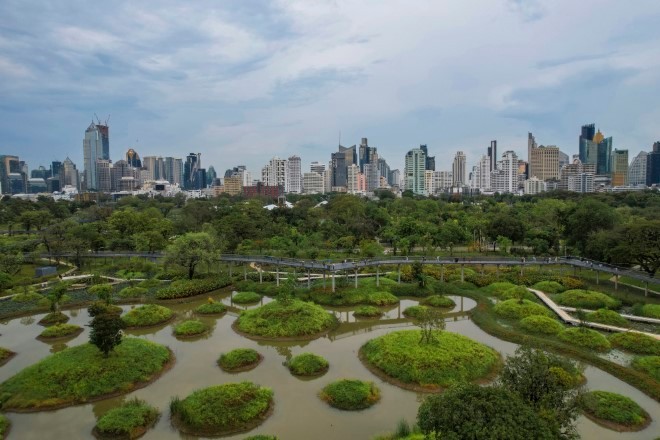 BANGKOK--Bursting with trees, ponds, plants and birdlife, a new inner-city park is delighting residents of Thailand’s bustling, congested capital. Every day, crowds visit Benjakitti Forest Park to savor a taste of nature in the heart of Bangkok.

It’s part of a drive to create a greener, more livable Bangkok by 2030, by bringing shade, peace and quiet to the hot, cacophonous city.

Another park adjacent to the site was built in the 1990s, with a vast, man-made lake. But the new, semi-wild, 41-hectare (101-acre) extension has captured the capital’s imagination. On weekends up to 12,000 people a day use its nature trail, walkways and cycling paths, snapping photos from its viewing platforms to fill their social media feeds.

The site was previously home to the factories of the state Thailand Tobacco Monopoly. A phased transformation began several years ago, and this year visitors began swarming ahead of its planned official inauguration in August. The thrumming of machinery has ceased, to be replaced by birdsong and chirping frogs. Even the rumble of nearby traffic fades to a barely discernible hum.

“I love it,” said 44-year-old music teacher Luckachai Krichnoi, who declared his aversion to air-conditioned rooms and shopping malls. “I love the outdoors and fresh air. Bangkok does not have that many big parks. I am glad we have this beautiful space.”

The design mixes the old with the new. The architects retained more than 1,700 of the site’s original, mature trees, then planted almost 7,000 others--most of them saplings--to create pockets of forest throughout the park. As they age, their foliage will grow and spread, deepening the cover.

The park’s already a hit with nature-lovers such as birdwatcher and photographer Somsak Jaitrong, who said he visits almost every day and has spotted more than 40 species so far, though others have counted many more.

“The way they designed the park is quite special because they put all kinds of trees here,” he said. “You know, the birds go where the food is, right.”

Water plays a central role. A series of ponds and islands creates a wildlife-friendly, wetland environment and also acts as a treatment system, filtering waste-water from nearby communities.

According to one of the designers, rekindling city dwellers’ relationships with the natural world was one of their aims. The park’s greenness will wax and wane with the seasons, just as in nature.

The landscape architect, Chatchanin Sung, said the green area can be more than just a place for running or jogging if it makes people more aware about the environment and promotes living in concert with nature.

The aim is to increase that to 10 square meters by 2030 through a much-touted park-building program, and by planting more trees.

But Bangkok’s real problem, argues one expert, isn’t the average amount of space, so much as its distribution. The showcase new park highlights that point.

“Benjakitti Park (is) located in the area where the green area per capita is much higher than other areas. So, yes, the park is very nice, very beautiful, I love it, but how about other districts?” said Niramon Serisakul, the director of Chulalongkorn University’s Urban Design and Development Center.

“Should the BMA--I mean the government authority who owns the land--should they consider to build this kind of park in the other districts which still lack this kind of space?” she said.

Six kilometers from Benjakitti’s blissful surroundings, another sliver of greenery stretches across Bangkok’s Chao Phraya River. At sunset, despite the roar of traffic, it’s a magnet, offering sweeping views and a cool breeze.

The 280-meter-long Chao Phraya Sky Park was created two years ago from a bridge that was built but never used. Bangkok needs more of this kind of creative use of derelict and spare space, Niramon argued, to address the lack of urban green areas in a more equitable manner.