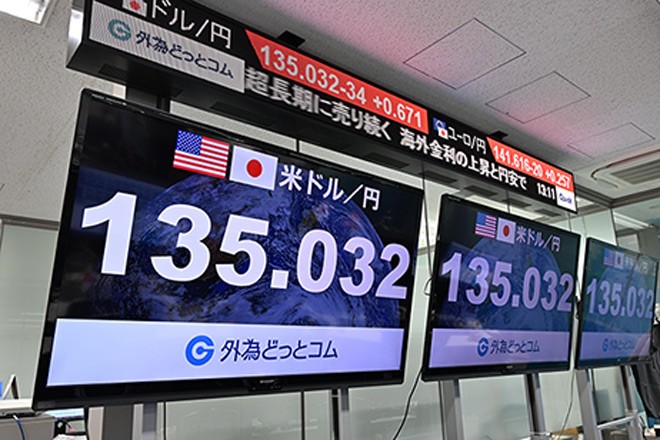 A screen shows the Japanese yen falling to 135 against the U.S. dollar at Gaitame.com Co. in Tokyo’s Minato Ward on June 13. (Hiroyuki Yamamoto)

A plurality of major firms say they are worried that the weak yen is hurting the country’s economy, according to a survey conducted by The Asahi Shimbun.

Forty-five of 100 leading companies from across Japan said the depreciating currency is having a negative impact on the economy, while only nine said the impact is positive.

Many business administrators expressed concerns in the survey that the recent rapid depreciation of the yen will speed the rise in import prices for resources and raw materials.

The Asahi Shimbun conducted the survey from May 30 to June 10.

As for how the weaker yen is affecting their own business operations, 34 companies said it has had a positive effect, while 27 said the effects have been negative.

The yen was in the middle of the range between 110 and 120 against the dollar until mid-March. But the interest rate hike by the U.S. Federal Reserve Board sparked a sharp depreciation of the yen.

And it continues to weaken as the Bank of Japan carries on its massive monetary-easing program. The yen fell to around 130 against the greenback in April and hit 135 on June 13.

Naomi Ishii, the executive vice president of Suzuki Motor Corp., is among those who do not welcome a weakened yen.

Ishii said that the depreciated currency has had a positive impact on exports, but it “has a negative effect on proceeds” due partly to rising costs of imported materials.

Takahiro Mori, executive vice president of Nippon Steel Corp., said that the “depreciation of the yen is good for manufacturing,” in principle.

“But its effects are negative now because prices for resources are rising, and logistics network disruptions are making it difficult to increase production and exports,” he said.

Keita Ishii, the president of Itochu Corp., said any positives the weak yen has brought for the economy are being overshadowed by the negatives.

“The disadvantage of imports outweighs the advantages of exports because these days in Japan, the import amount exceeds the export amount,” he said.

Even companies who responded that the weak yen has a positive impact said the benefits have been limited to only some export companies.

“With many companies and individuals concerned about the negative aspects of the depreciating yen, it may have adverse impacts psychologically,” he said.

He also questioned the Bank of Japan for continuing its massive monetary easing policy as the economic environment continues to slide.

(This article was written by Tomoya Fujita and Kenta Nakamura.)