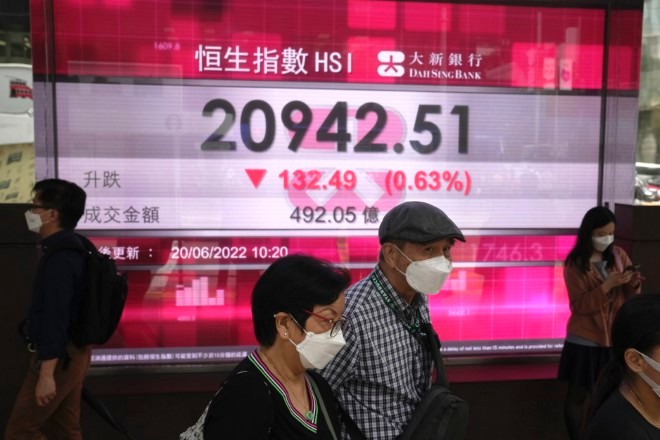 Asian markets were mostly lower in cautious trading Monday ahead of a federal holiday in the U.S.

Worries over inflation and risks of a global recession from central bank efforts to bring it under control appeared to outweigh Wall Street’s positive close on Friday.

The price of the world’s most popular cryptocurrency slipped back below the psychological benchmark of $20,000 early Monday after rising to $20,742. Bitcoin had plunged nearly 10 percent to under $18,600 during the weekend, according to the cryptocurrency news site CoinDesk.

Shares fell in most major Asian markets but edged higher in China, which in a widely expected move, kept its 1-year and 5-year loan prime rates unchanged.

Given China’s struggle to bring outbreaks under control and its already faltering economy, “rate cuts in the coming months are still likely as we expect the economic recovery to be slow under the COVID-zero policy. After this rate pause, the government should hand out more fiscal stimulus,” Iris Pang, chief economist Greater China at ING, said in a commentary.

Two of the world’s three biggest economies, China and Japan, are not engaged in raising interest rates.

Last week, Japan’s central bank stuck to its near zero interest rate policy, although comments from Bank of Japan Gov. Haruhiko Kuroda were closed watched for hints about what Tokyo might do about the weakening yen.

A weaker currency can help the earnings of Japan’s exporting giants like Toyota Motor Corp., but it can also signal a fragile economy.

Kuroda expressed some concerns about the low yen and its impact on Japanese companies, but said he had no immediate plans to change monetary policy. That means a continued growing gap between interest rates and yields on investment in Japan and the U.S., and continued dollar strength.

“It is inescapable that the U.S. dollar must go significantly higher, while there is the emperor in place, but once the clothes are seen lacking, down it will come. This could be one of the greatest market roller-coaster opportunities of any market of all time,” said Clifford Bennett, chief economist at ACY Securities, in a commentary.

U.S. markets are closed Monday in observance of the Juneteenth holiday. But the testimony on monetary policy by Federal Reserve Chair Jerome Powell before the Senate Banking Committee and the House Financial Services Panel is set for later this week.

Markets are bracing for a world with higher interest rates, led by the move at the Federal Reserve. Higher rates can bring down inflation, but they also risk a recession by slowing the economy and push down on prices for stocks, bonds, cryptocurrencies and other investments.

Last week, the Fed hiked its key short-term interest rate by triple the usual amount for its biggest increase since 1994. It could consider another such mega-hike at its next meeting in July. A report last week on the U.S. economy also showed that industrial production was weaker last month than expected.

The yield on the 10-year Treasury pulled back to 3.23 percent Friday from 3.30 percent late Thursday.