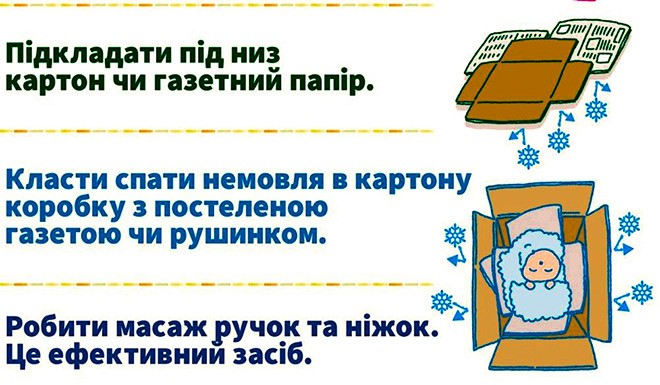 The website explains in Ukrainian how to build a baby bed using cardboard. (Hiromu Tsuchiya)

SAKU, Nagano Prefecture—A pediatrician and his colleagues here are sharing Japan’s experiences with natural disasters on a website in Ukrainian to help parents and caregivers with children in evacuation in the war-ravaged European country.

The website shows, for example, how to clean children’s bodies with limited amounts of hot water and how to treat diarrhea in shelters.

“There are things that we can do although we live in Japan far away from (Ukraine),” said Sakamoto, who had studied in Poland, Ukraine’s neighbor.

He said he hopes the website “helps people in Ukraine even just a bit.”

Team members have been sharing know-how on caring for children during natural disasters, including typhoons and earthquakes, on their Japanese website since 2015.

The site is called the “Oshiete! (Let me know!) Doctor Project.”

The Ukrainian site was opened on March 3, a week after Russia invaded Ukraine.

“Japanese have a lot of knowledge about life in evacuation because our country has experienced many disasters,” Sakamoto said. “I thought our know-how could be useful in the war-torn country.”

Sakamoto gathered opinions of experts on disasters and neonatal care. He also received cooperation from illustrators and web designers.

On social media sites, the doctor asked for volunteers who could translate Japanese into Ukrainian. Two Ukrainians responded, including a man in his 60s living in Kyiv.

Sakamoto said the man risked his life to send the translations because he had to flee to an underground shelter every time he heard an air-raid alarm.

The site posts practical information with color illustrations, including:

-- Mix 6 teaspoons of sugar and half a teaspoon of salt in a liter of water to make oral rehydration solution (ORS) to prevent dehydration;

-- Layers of newspaper or towels in a cardboard box can provide a bed that protects a baby from cold air;

-- An evacuation shelter should have space where children can play at ease as usual.

The website also advises parents and caregivers to treat children warmly if they become nervous during emergency situations. It says children keep repeating the same conversation, but this is a necessary process for them to deal with and understand what they have experienced.

The Japanese embassies in Ukraine and Bulgaria introduced the site on Twitter. It received 35,000 views in the two and a half months since it opened.