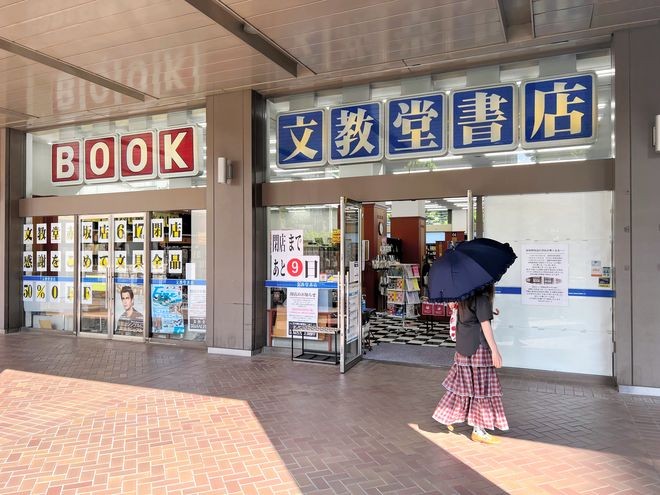 A passer-by reads a notice of closing posted on the Bunkyodo bookstore chain's Akasaka outlet in Tokyo's Minato Ward on June 9, before the store went out of business on June 17. (Asahi Shimbun file photo)

I once had a dream in which I was looking for something in a little bookstore in my hometown.

I'd known the place since childhood. Back then, I used to race to it on publication days of my favorite manga magazines.

It was also where I discovered--and became fascinated by--works by sci-fi writer Shinichi Hoshi (1926-1997) in the paperbacks section.

This is probably what I would call my archetypal bookstore.

However, such memories may eventually become totally foreign to the current and future generations of children.

Bookstores are rapidly disappearing in small towns, as well as in the big cities.

I learned from a recent Tokyo local news page of The Asahi Shimbun that there used to be a number of general bookstores in the vicinity of the capital's Tokyo Metro Akasaka Station, but they are all gone now.

At the Akasaka bookstore of Bunkyodo, which was the last to close, a notice of closure was reportedly posted on its door along with the names of all the employees.

The sign read: "Are bookshops as a business category no longer needed in towns in our society?"

Internet booksellers, including Amazon, are definitely convenient, but I still want to go to brick-and-mortar places because they seem to help expand my areas of interest.

Recommendations made by store clerks give me a sense of their genuine commitment to their profession. There are also absolutely titles that I will never come across among the online merchants' "recommended for you" selections.

The ancient Roman city of Pompeii, which perished in the volcanic eruption of Mount Vesuvius in 79 A.D., had a bookshop whose white-painted walls bore messages in red letters, such as the sale dates of new publications and the latest translations of foreign books, according to "Bukkusera no Rekishi" (History of booksellers), a Japanese translation of a work by French author Jean-Yves Mollier.

If I may exaggerate, bookshops are integral to human civilization. They must never be allowed to go extinct with my generation.

My confidence is shaken by their continued disappearance, however.