TASTE OF LIFE/ Low-salt miso soup: Make a savory soup that cuts down on the salt, not the flavor 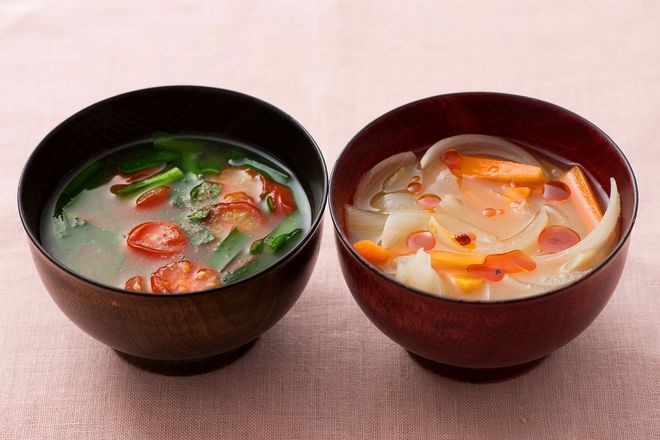 Miso soup with cherry tomatoes and garlic chive, left, and miso soup with onion and carrot (Photo by Atsuko Shimamura)

Cooking expert Yoichi Honda attended a vocational school in Tokyo after graduating from high school and obtained a certificate as a nutritionist.

That would lead to him finding a job at a company that makes school lunches.

He also enjoyed taking photos and would capture live performances of bands, among other things, on the side.

As Honda became more immersed in photography, he decided to leave his company and began a career as a professional photographer. When people who learned of his background suggested he take cooking photos, Honda began making dishes and taking photos of them.

He then visited the editorial offices of various magazines to sell his ideas.

“All I did was hit a wall at first. They were also merciless about the recipes I showed them,” says Honda.

One editorial department, however, gave Honda an assignment and told him to come back.

“I visited the editorial department every month for a year and a half. The theme would be ‘50 chicken recipes’ one month, and mushroom recipes the next. I would come up with recipes and repeatedly cook them.”

Little by little, magazines started to accept his ideas, and his career as a cooking expert took off. Honda was in his late-20s by then.

Honda currently offers his recipes in magazines and online, gives cooking classes and is involved in product development.

While he is given a wide range of themes, he said he really has to rack his brains when the theme is salt reduction.

“Home cooking flavors are determined by salt and oil. Having to cut back on one of them is quite daunting,” he said.

Simply reducing the amount of salt will make a dish less satisfying in terms of taste and feeling full, but it is a great chance to show off your skills.

Choose ingredients that are richer in flavor and aroma, which will be further complemented by combining different ingredients and adding a little protein-rich food such as meat, fish, “abura-age” (thin fried tofu), or egg.

“Use spices such as chili oil, pepper, ‘sansho’ (Japanese pepper), and curry powder or relishes, including ‘mitsuba’ leaves and ginger, to add flavor and accents,” said Honda.

Yoichi Honda: Born in Fukushima Prefecture in 1983, he is a cooking expert. He is known for dishes that incorporate a generous amount of vegetables and make the most of the original flavors of the ingredients. He has published books including “Enbun ichinichi 6 g Wagamama otoko wo unaraseru Umai! genen meshi” (6 grams of salt a day: Tasty dishes with less salt that satisfy picky men).

For miso soup with cherry tomatoes and garlic chive

1. Remove calyx from tomatoes, cut in half horizontally. Cut nira into 2 cm pieces.

2. Pour dashi stock in pot and bring to a boil. Add tomatoes and nira and simmer for about 1 minute. Stir in miso.

3. Serve in bowl and sprinkle with coarsely grated black pepper.

For miso soup with onion and carrot

2. Add dashi stock, onion and carrot into pot and simmer for about 5 minutes on medium heat. Stir in miso.

3. Serve in bowl and add few drops of chili oil.