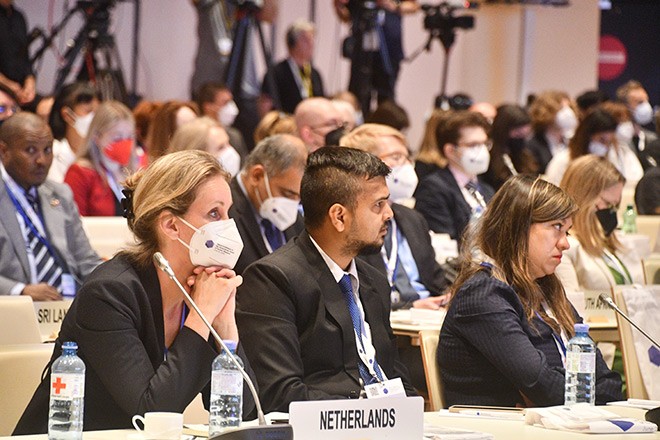 Diplomats listen to the account given by Sueichi Kido, a victim of the 1945 atomic bombing of Nagasaki, at the 2022 Vienna Conference on the Humanitarian Impact of Nuclear Weapons on June 20. (Gakushi Fujiwara)

VIENNA--Japan, the only country that experienced an atomic bombing, was notably absent as the first meeting of parties to the U.N. Treaty on the Prohibition of Nuclear Weapons opened here on June 21.

Participating countries are expected to discuss support for victims exposed to radiation from nuclear weapons and testing, the road map for the abolition and expanding the number of nations ratifying the treaty during the three-day session.

Germany, Norway, Belgium and Australia, which are also relying on the U.S. nuclear umbrella, like Japan, are expected to participate in the session as observers.

Despite opting out of the first such meeting, Japanese government officials were present at the 2022 Vienna Conference on the Humanitarian Impact of Nuclear Weapons, held on June 20.

Yoshizane Ishii, director of the Foreign Ministry’s Arms Control and Disarmament Division, said Japan’s attendance at the TPNW meeting as an observer would not make much sense as nuclear powers have not ratified the treaty.

“There would be little progress in nuclear disarmament unless nuclear powers were committed to the cause,” he said.

In Japan, Prime Minister Fumio Kishida defended the decision to skip on June 15.

“Japan should start with efforts to promote nuclear disarmament and nonproliferation as a realistic step while maintaining trust with United States, Japan’s only defense ally,” he said.

But many have expressed disappointment over Japan’s approach toward the TPNW meeting.

Phil Twyford, New Zealand’s minister for disarmament and arms control, said on June 20, "We would love to have seen Japan attend."

"Japan has a very special place in the international disarmament community for the reasons of history," he said. "The experience of the hibakusha, incredibly, it's central to the whole process and the formation of the TPNW."

His comment came after attending the 2022 Vienna Conference on the Humanitarian Impact of Nuclear Weapons.

Twyford also said, however, he is not discouraged that nuclear powers such as the United States, Russia, China, Britain and France have passed up the meeting.

He said a constructive environment is being built for a dialogue with those countries, citing the attendance of nations relying on the U.S. nuclear umbrella.

Traveling to Vienna, Yuta Takahashi, a senior at Keio University in Japan and a co-leader of a group advocating the abolition of nuclear weapons, pleaded with Ishii to attend the meeting, showing a petition with more than 20,000 signatures collected online.

“This is not the way Japan should behave as a victim of a nuclear blast,” he said.

Germany has not joined the TPNW as it places more importance on the discussion of the older Nuclear Non-Proliferation Treaty (NPT), to which nuclear-weapon states are signatories.

But Germany is expected to attend the TPNW meeting.

When the administration of Chancellor Olaf Scholz was formed late last year, Foreign Minister Annalena Baerbock told a German newspaper that participating as an observer would not hurt Berlin’s membership in NATO and its nuclear sharing arrangement.

She said in the long run, the world will be a safer place when the reduction of nuclear weapons is achieved.

Germany can play a constructive role, she said, by participating in the TPNW discussions while supporting nuclear disarmament negotiations at the NPT.

Australia is expected to take part in the TPNW meeting because the Australian Labor Party, which is pushing for nuclear disarmament, is now in power after winning the general election in May.

But the country will likely meet fierce opposition to ratifying the treaty as conservative forces rely heavily on the U.S. nuclear umbrella.

(This article was compiled from reports by Tabito Fukutomi and Gakushi Fujiwara in Vienna, as well as Jun Nojima in Berlin and Koji Nishimura in Singapore.)