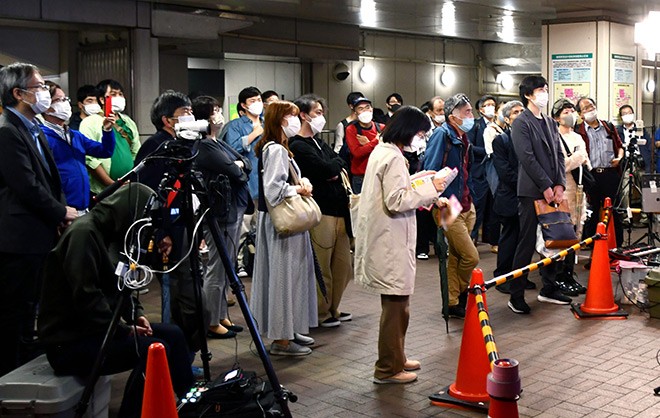 Voters listen to a speech by a candidate in the upcoming Upper House election in Tokyo on June 14. (Takahiro Takizawa)

Tokyo is shaping up as a fierce battleground for the upcoming Upper House election this summer, according to political insiders, as newer political parties take on established incumbents.

Around 30 candidates are expected to vie for the six seats up for grabs in the Tokyo electoral district in this election, which is expected to be formally announced on June 22 with the vote held on July 10.

Komeito, the LDP’s junior coalition partner, and the Japanese Communist Party hold one seat each.

“Whether you are knowledgeable about politics or not, it doesn’t matter at all. Politics is about communication with people,” said Taro Yamamoto, 47, leader of Reiwa Shinsengumi, a left-wing opposition party.

He made his appeals to voters shouting to a crowd in front of Nerima Station in Tokyo’s Nerima Ward on the night of June 14.

He has been visiting many places in Tokyo, campaigning unannounced on the streets--a strategy the party calls a “guerrilla street campaign.”

Yamamoto was a Lower House member but resigned in April before announcing on May 20 that he would run in the Tokyo electoral district in the Upper House election.

Yamamoto won a seat in this same electoral district for the first time in the Upper House election in 2013 by gaining 660,000 votes.

His decision to run has dramatically changed the battlefield in the capital, insiders said.

Known for his eloquent and sharp criticism of the government, Yamamoto also garnered 650,000 votes in the Tokyo gubernatorial election in 2020, in which Yuriko Koike won.

A senior official from an opposing political party said that Yamamoto “will attract (undecided) voters who are critical of the government.”

Another newer party taking on the larger parties in the Tokyo electoral district is Tomin First no Kai (Tokyoites First).

On June 18, Koike, a special counsel of the party and Tokyo’s governor, appeared to stump on the street near the western exit of Shinjuku Station to support Chiharu Araki, 40, a member of the Tokyo metropolitan assembly and the party’s candidate in the Tokyo electoral district.

“I want Araki to pass on various successes achieved by Tokyo to national politics. That’s how I feel,” Koike said in her first street speech this campaign.

Koike won a landslide victory in the 2020 Tokyo gubernatorial election by gaining 3.66 million votes. Tomin First no Kai gained 31 seats and secured a position as the second largest party in the Tokyo metropolitan assembly election in 2021, although it lost its ranking as the largest party to the LDP.

In the upcoming Upper House election, the Democratic Party for the People is backing Araki and fighting with Tomin First no Kai.

Yuichiro Tamaki, leader of the DPP, has a history of joining up with Kibo no To (Party of Hope), which was led by Koike just before the 2017 Lower House election.

A senior official of the LDP's Tokyo metropolitan chapter views the cooperation between DDP and Tomin First no Kai as a sign that Koike still hopes to be involved in national politics.

“Koike hasn’t given up on her dream,” the official said.

A senior official from Araki’s camp said, “Whether or how Araki wins will affect the power balance between the DDP and Tomin First no Kai.”

The official is also hopeful that if Araki wins a solid victory, Tomin First no Kai could form cooperative relationships with other opposition parties, not just the DDP, which could lead to Tomin First no Kai exerting a stronger influence on the national political stage.

Nippon Ishin no Kai (Japan Innovation Party) is gunning for a Tokyo seat in this election, aiming to repeat its success in the capital in the 2019 Upper House election.

Yuki Ebisawa, 48, a former Osaka city assembly member, will run in the Tokyo electoral district for the party.

Hirofumi Yoshimura, deputy head of the party and the governor of Osaka, has already hit the streets with Ebisawa twice now.

Despite its public image as being “Osaka’s political party,” Nippon Ishin no Kai had a good showing by wining around 860,000 votes in the Tokyo proportional representation block in the 2021 Lower House election--some 430,000 votes less than the CDP, which came in second after the LDP.

Officials of Nippon Ishin no Kai say that he may come to Tokyo again to support Ebisawa once the election is officially announced.

In May, popular author Hirotada Ototake, 46, declared that he would throw his hat in the ring in the Tokyo electoral district as an independent candidate.

Some political parties are nervous that he could attract votes due to his high profile.

Meanwhile, Kentaro Asahi, 46, an incumbent Upper House member and a former volleyball player, and Akiko Ikuina, 54, a former member of the pop idol group Onyanko Club, will stand for the LDP.

The LDP has held two seats in the Tokyo electoral district since 2013.

A senior official of the LDP's Tokyo metropolitan chapter said the key to success for them will be in how they divide LDP votes between the two of them.

The party has divided its 33 members of the Tokyo metropolitan assembly into two groups in this election campaign, so that it can evenly distribute votes from the party’s support organizations to the two candidates.

In contrast, the CDP has concentrated its resources on only one of its two candidates in the Tokyo electoral district.

The CDP is prioritizing campaigning for Akihiro Matsuo, 47, a former Lower House member, and is mobilizing most of the party’s Diet members or local assembly members who belong to the party’s Tokyo metropolitan chapter.

The CDP’s lopsided support for Matsuo stems from the party’s concerns that he might not win since Rengo Tokyo, a trade union supporting the CDP, decided to support Araki as well as Matsuo.

For Komeito, Toshiko Takeya, 52, an Upper House incumbent, will stand to secure the third term by cementing support from Soka Gakkai, a Buddhist group that is the backbone of the party’s support, as well as by leveraging social media.

Taku Yamazaki, 37, another incumbent, aims to retain his seat for the Japanese Communist Party.

He has campaigned in areas popular among young people, such as Harajuku.

Other candidates to contest the Tokyo electoral district include Ryoichi Hattori, 72, who will stand from the Social Democratic Party.

For the NHK Party, Keiji Ino, 38, Kenji Setta, 51, Ken Tanaka, 56, Yohei Hasegawa, 45, and Miki Matsuda, 35, will all run in the electoral district in their first attempts to become Diet members.