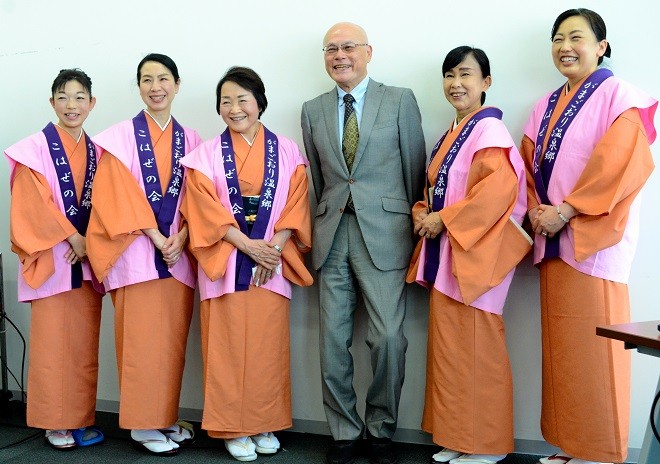 Ryusuke Kakigi, third from right, poses with ryokan proprietresses who cooperated in the tests for his team’s study, in Okazaki, Aichi Prefecture, on May 26. (Toshihiro Kashiwagi)

OKAZAKI, Aichi Prefecture--Inn staff steeped in the art of “omotenashi,” Japanese for hospitality, can “read” the facial expressions of patrons more acutely than those who have never worked in the hospitality industry, a study found.

The finding may offer clues to training in interpersonal communication skills, said Ryusuke Kakigi, professor emeritus of brain sciences at the National Institute for Physiological Sciences in Okazaki, Aichi Prefecture, who led the research.

He said it was “the first in the world to shed objective light on hospitality by means of brain wave measurements.”

His team conducted tests where the subjects were exposed to monotonous, long-lasting footage, interspersed with abrupt presentations of images showing neutral, happy and angry faces of men and women.

The study enlisted the help of “Kohaze no Kai” (Clasp association), which organizes proprietresses of ryokans and hotels in hot spring resorts in the city of Gamagori, Aichi Prefecture, in central Japan.

The association’s members are hospitality professionals, who are also working to promote tourism.

The researchers compared a group of 21 women aged between 20 and 70, including inn and hotel proprietresses and expert guest room maids, with a group of 19 women of about the same age who had no experience in the hospitality industry.

The study revealed a clear difference in brain wave activity in the occipital region when the images were shown. The hospitality workers demonstrated a stronger reaction than that of those in the other group, and reacted particularly acutely to neutral and angry faces.

“They are reacting immediately, particularly to a sense of displeasure on the part of their interlocutors, with quick processing that takes them only about 100 milliseconds,” Kakigi said.

The study, however, found no major difference in the reactions in the temporal region that arise later.

“Perhaps the proprietresses are suppressing their information processing and returning very quickly to their usual frame of mind after they have read the facial expressions of whoever they are talking to,” Kakigi reasoned.

“I think I learned quite naturally, as I see different guests from day to day, how to read slight changes in people’s looks,” said Eiko Watanabe, head of the Kohaze no Kai association.

The study could not tell if the characteristic responses to the facial expressions were inborn or acquired through training.

The scientists said, however, that findings from their study could be applied in the future, for example, to training in interpersonal communication skills.