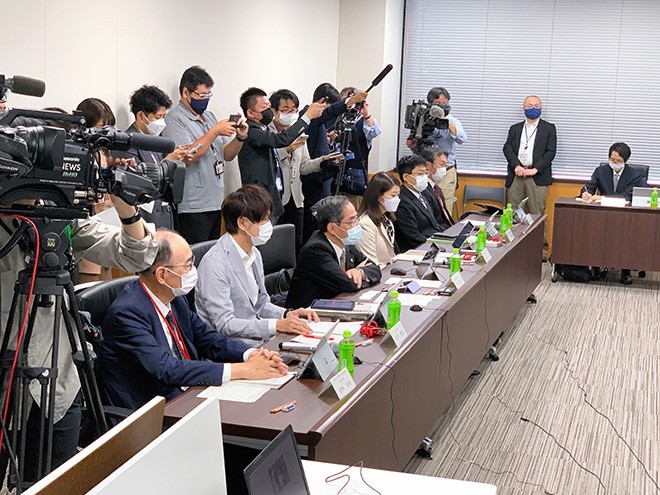 The first meeting of the experts panel that examined the government's COVID-19 response is held on May 11 in Tokyo's Chiyoda Ward. (Kohei Morioka)

A "fast movie" is an illegal online video in which a feature-length film has been edited down to about 10 minutes of running time.

The practice of fast-forwarding movies while watching them is said to be a growing trend among young people today, who apparently want to see as many films as possible in a limited time and still know how each ends.

One of their reasons for doing this is to follow what their friends are talking about, according to the book "Eiga wo Hayaokuri de Miru Hitotachi" (People who fast-forward the movies they watch), by Toyoshi Inada.

Antithetical to any act of deep appreciation of a film, it somehow reminded me of how a panel of experts examined the government's COVID-19 response.

A "fast look" was the impression I got from the way the review was conducted.

According to Shigeru Omi, Japan's top authority on infectious diseases who headed the government's COVID-19 advisory panel, the panel interviewed him for "only seven minutes."

Not only was that incredibly brief, but the panel did not even interview then-Prime Minister Yoshihide Suga, nor any of his Cabinet ministers concerned.

Predictably, the finished report proved to be lacking in substance.

Omitted from it was any mention of the government's disastrously ridiculous Go To Travel campaign, the operation of which was likened to stepping on the gas and brake pedals simultaneously.

Nor did the report explain why there were not enough hospital beds.

A thorough examination of the government's COVID-19 response is imperative if the nation is to properly prepare for the next threat of infections.

And if the government's sense of commitment remains only tepid, then the Diet should launch an investigation of its own, if only to remind the government of its negligence.

After the 2011 nuclear disaster in Fukushima, an accident investigation committee was established not by the government, but by the Diet as well, and the prime minister at the time and other concerned parties were interviewed.

Why can't the same be done now?

In addition to matters of immediate concern such as the soaring prices of goods, I would also like candidates to debate Japan's long-term health care policy and other issues.

The attitude of "since the danger is past we just can forget about it" does not belong in the Upper House, which is sometimes referred to as "the bastion of good sense."