EDITORIAL: A high voter turnout is an absolute must in July 10 election 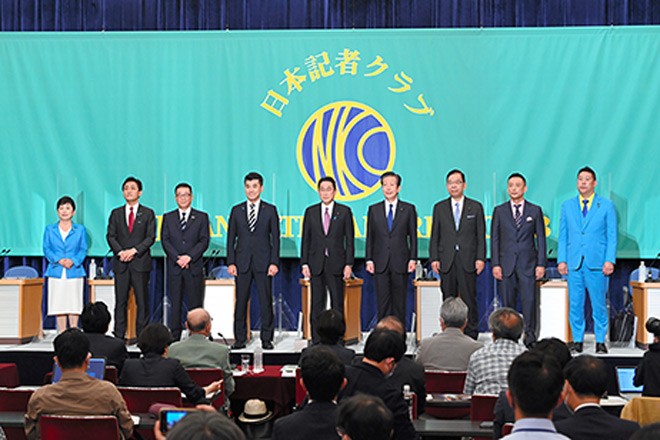 The leaders of nine political parties gather at the Japan National Press Club in Tokyo on June 21 for a debate. (Takuya Isayama)

Campaigning for the July 10 Upper House election kicks off June 22.

The election will offer voters their first opportunity to rate the performance of the administration of Prime Minister Fumio Kishida, which was formed a little over eight months ago and won a popular mandate in the Lower House election held soon after on Oct. 31 of last year.

Unless the Lower House is dissolved for some reason, no national election will be held for the next three years, save for by-elections. It will be a while before voters get to cast their ballots again on national policy.

Do we, the voting public, intend to continue backing Kishida’s style of governance? Or do we want to reinforce the Diet’s checks-and-balance function through stiffer government-oppposition rivalry?

Even though the upcoming election will not be about choosing a new administration, it is still quite important because the outcome will shape the foundation and direction of Japanese politics over the next few years.

After seven years and eight months of Shinzo Abe holding sway in his second stint as prime minister, which effectively enabled him to remain in office unchallenged, his succesor, Yoshihide Suga, stepped down after only one year, despite his stated goal of perpetuating Abe’s policital legacy.

Then came Kishida, who showed no interest whatsoever in cleaning up his predecessors’ “negative legacy” that included scandals involving the Moritomo and Kake educational institutions and Abe’s shady practices regarding cherry blossom viewing parties he hosted for his supporters.

However, by touting his “carefully considered and tolerant politics” and “ability to listen to people,” Kishida has projected a public persona that set him clearly apart from his two predecessors’ autocratic style of governance.

Kishida managed to ride out the sixth wave of the COVID-19 pandemic without declaring a state of emergency, and has so far dealt with the war in Ukraine by acting in concert with the United States and Europe and enforcing severe economic sactions against Russia.

And achieving a 100-percent success rate in the passage of government-sponsored bills through the Diet for the first time in 26 years, Kishida sailed through his first regular session with the ruling coalition calling all the shots. His Cabinet’s approval ratings remain high.

On the other hand, an action plan regarding his pet policy of “new capitalism” was finally approved by the Cabinet earlier this month, but his initial concept of “reinforced distribution” has fizzled out, turning his policy into nothing more than a rehash of growth programs advocated by past administrations.

As for his pandemic response, Kishida made good on his promise to call for the establishment of a Cabinet “agency for infectious disease crisis management” before the Upper House election. But he has yet to act on his other promise to thoroughly examine his past pandemic response policy in its entirety.

Which of Kishida’s policy goals have been met, and how far, and which of them have changed or been dropped?

Above all, the real achievements of the Kishida administration need to be closely scrutinized before the votes are cast in the upcoming election.

The Japan National Press Club hosted a debate on June 21, in which the leaders of nine political parties took part.

At the start, they were asked to indicate the most pressing issue they wished to address, and almost all of them said “the rising prices of goods.”

This was entirely to be expected, as politicians are responsible for protecting the livelihood of the public at large.

Prior to the debate, Kishida held the first meeting of the goverment’s comprehensive task force on prices, wages and livelihood, and introduced a new system for awarding points to households that cooperate with the government’s power saving efforts. He also announced the establishment of a subsidy program aimed at curbing the rising costs of food, animal feed and fertilizer production.

It is pretty obvious that Kishida’s intention was to thwart criticism from opposition parties that his government has done nothing about rising prices.

In the meantime, many of the opposition parties--including the Constitutional Democratic Party, Nippon Ishin no Kai (Japan Restoration Party) and the Japanese Communist Party--have added cuts in the consumption tax rate to their party platforms, while the Democratic Paty for the People is advocating an “inflation allowance” of a uniform 100,000 yen ($735) in cash handouts to households.

Each of these initiatives needs to be explained in detail in terms of their funding, viability and merits and demerits.

There is no doubt that Russia’s invasion of Ukraine has heightened the Japanese people’s concerns about, and interest in, national security issues.

The government is in the process of reviewing, until the end of this year, the National Security Strategy, the National Defense Program Outline and the Mid-term Defense Buildup Program. The task is expected to pick up pace after the Upper House election, and the importance of diplomatic and defense debate has become greater than ever.

The ruling Liberal Democratic Party pledges to fundamentally reinforce Japan’s defense capabilities within the next five years, at the intended cost of more than 2 percent of gross demestic product (GDP).

But during the debate, Kishida reiterated that the number is not set in cement, and refused to even discuss the scale of the buildup and funding.

The prime minister could not possibly have been asking for a carte blanche. To ensure that voters will be able to choose their future for themselves, Kishida must explain his specific throughts during the election campaign, including the issue of Japan’s capability to attack enemy bases.

In every one of the 32 single-seat constituencies that are said to determine the outcome of the Upper House election, opposition parties fielded their shared candidate in the past two elections.

This time, however, such an agreement proved harder to come by, and the number of shared-candidate districts has dwindled to 11.

The Constitutional Democratic Party of Japan failed to accomplish its goal of bringing about a united front. Nippon Ishin no Kai is aiming for the No. 1 opposition spot. The Democratic Party for the People is effectively behaving like a ruling party, endorsing the Kishida administration’s initial budget plan.

Whether the parties belong in the ruling or opposition camp is no longer relevant. The post-election political landscape will definitely be influenced by which of the opposition parties wins the most popular support and grows in influence.

We sincerely hope that as many people as possible will cast votes of their choice. But voter turnouts in national elections have languished in recent years.

The turnout for the last Upper House election held three years ago was 48.80 percent, the second lowest on record. The situation is nothing short of grave when one in two voters abstains.

And even though Lower House elections tend to have higher turnouts, the figure for last October was 55.93 percent, the third lowest in postwar history.

In the coming 18 days leading to Election Day, the ruling as well as opposition parties must try their hardest to stimulate the interest of voters through lively debate and active campaigning.

A low voter turnout is bad news for all parties, both ruling and opposition. It represents the public’s vote of non-confidence in the entire political community.