Campaigning gets under way for July 10 Upper House election 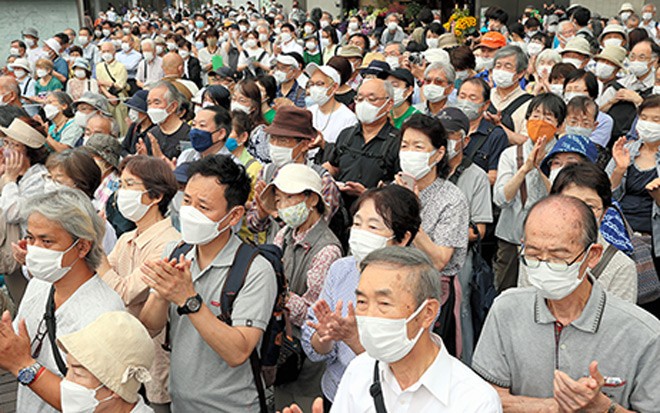 Voters in Tokyo listen to a speech on June 22, the start of campaigning for the July 10 Upper House election. (Tatsuya Shimada)

Campaigning kicked off June 22 for the Upper House election that will give voters their first opportunity to assess the Kishida administration’s performance since it took power eight months ago, with skyrocketing increases in consumer prices and fuel due to the weakening yen being a key issue.

The vote on July 10 will determine 125 seats, including a by-election in Kanagawa Prefecture neighboring Tokyo.

A total of 545 candidates registered for the prefectural and proportional representation districts by the 5 p.m. deadline. A record 181 women are runningin the election.

The overall number of candidates was much higher than 2019 when 370 ran, in large part due to bickering among opposition parties over backing the same candidate in the single-seat prefectural districts that are the key to determining which side emerges victorious.

Prime Minister Fumio Kishida and the leaders of eight other major parties held a debate at the Japan National Press Club in Tokyo on June 21 where the focus was how to deal with the surge in consumer prices triggered by Russia’s invasion of Ukraine.

Kishida also raised an old chestnut, revising the postwar pacifist Constitution. He said it would be important to cobble together an amendment proposal that could gain the support of two-thirds of the two Diet chambers, the threshold to initiate any constitutional amendment.

But Kenta Izumi, the head of the main opposition Constitutional Democratic Party of Japan, said there were more important matters to deal with.

Stating that there were no pending issues that would lead to the collapse of Japan unless the Constitution is amended, Izumi said, “Instead, what is important is dealing with such pressing issues as the decline in the population, the weakening of rural areas and the growing disparity in education.”

Natsuo Yamaguchi, the leader of junior coalition partner Komeito, backed the economic policies being pushed by the Kishida administration, but admonished the prime minister for not having the government attend in the capacity of observer status an ongoing conference in Vienna of nations that have signed the Treaty on the Prohibition of Nuclear Weapons.

Getting somewhat ahead of even the ruling Liberal Democratic Party that Kishida leads, Ichiro Matsui, the head of Nippon Ishin (Japan Innovation Party) urged the prime minister to lay out a specific timetable for presenting voters with a referendum to vote on constitutional amendments. As one possibility, he suggested the unified local elections to be held next spring.

But rather than rush to gain two-thirds of the seats so an amendment could be initiated, Kishida called for more thorough discussions to reach an agreement by that threshold number about what measure should be presented to voters in a referendum.

The other opposition parties agreed that drastic measures were needed to deal with the spike in consumer prices brought on by the rapid depreciation of the yen as well as higher energy prices due to the Russian invasion of Ukraine.

Kazuo Shii, the head of the Japanese Communist Party, proposed taxing the internal reserves of companies as a way to induce them to use those funds to raise the salaries of employees.

Taro Yamamoto of Reiwa Shinsengumi said the consumption tax rate should be eliminated altogether, while a number of parties, including the CDP, proposed a temporary cut in the current 10-percent levy.

Mizuho Fukushima, the head of the Social Democratic Party, proposed a three-year period in which the consumption tax was not collected.

Yuichiro Tamaki of the opposition Democratic Party for the People agreed with Kishida’s position that current monetary easing policies adopted by the Bank of Japan offered the best hope of propping up the domestic economy. But he also called for a massive increase in government spending to raise employee salaries.

Takashi Tachibana, the head of the party which pledges to protect the public from Japan Broadcasting Corp. (NHK), proposed doing away with subscription fees for those on pensions, likening them to taxes for which pensioners are exempted.

(Haruna Shiromi contributed to this article.)