Fear of possible use of nuclear arms heard at TPNW meeting 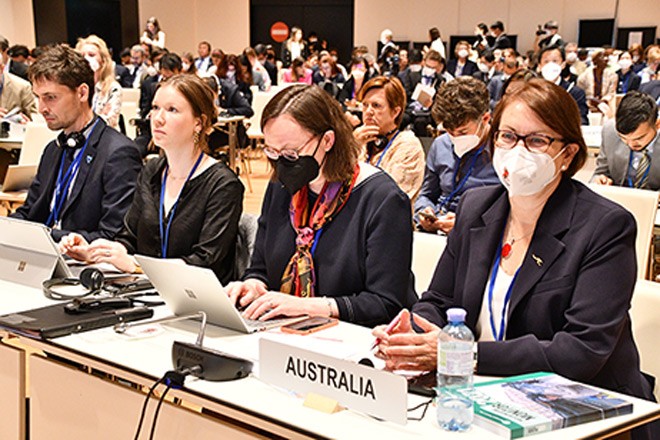 Delegates from Australia and Belgium attend the first meeting of parties to the U.N. Treaty on the Prohibition of Nuclear Weapons in Vienna on June 21. (Gakushi Fujiwara)

VIENNA--Russia’s threat to use nuclear weapons in Ukraine cast a dark shadow over the opening day on June 21 of the first meeting of the U.N. nuclear ban treaty here.

Many countries expressed heightened concerns about the growing possibility as Russia has threatened their use since its invasion of Ukraine in February.

The three-day session on the U.N. Treaty on the Prohibition of Nuclear Weapons (TPNW) opened with representatives from more than 80 countries and regions in attendance.

Alexander Kmentt, chief of the Austrian Foreign Ministry’s Arms Control and Nonproliferation Department, who is chairing the meeting, noted that the global community is now at a crossroads when it discusses weapons of mass destruction.

He said the TPNW, which went into force last year, offers hope to the international community.

The treaty prohibits the use, threat of use, development, testing, production, acquisition and possession of nuclear weapons.

Sixty-five nations and regions have ratified the treaty to date. But none of the nuclear powers have and they are not legally bound by the treaty.

Among the participants at the first meeting were about 30 states that attended with observer status, including such NATO members as Germany, Belgium, the Netherlands and Norway.

Finland and Sweden, both of which are applying for NATO membership, were also at the meeting as well as Australia, which relies on the U.S. nuclear umbrella as do NATO member states.

Kmentt praised those nations with observer status for showing up despite their reliance on the U.S. nuclear arsenal.

He said their attendance reflected their readiness to play a constructive role in the in-depth discussions of the humanitarian consequences and risks of nuclear weapons.

U.N. Secretary-General Antonio Guterres, in a video message, urged nations to join the treaty, noting the world is coming closer to the danger of nuclear weapons being used again.

“Today, the terrifying lessons of Hiroshima and Nagasaki are fading from memory,” he said. “The once unthinkable prospect of nuclear conflict is now back within the realm of possibility.”

The U.N. chief asked nations to support the treaty, calling it an “important step toward the common aspiration of a world without nuclear weapons.”

“Let’s eliminate these weapons before they eliminate us,” he said.

Among the dozens of people who took the podium on June 21 was a Kazakhstan man who was born without arms due to his parents’ exposure to radiation from the Soviet Union’s nuclear tests in his country.

“I want everyone to know the terror of nuclear weapons,” he said.

His family lived in a town located away from the testing site. He said residents in the town were completely unaware of the devastating consequences of the tests and said they reported seeing “bright explosions.” They died one by one later, according to the man.

He said children and grandchildren of those exposed to radiation from the nuclear tests have to live with the fear of the lasting health effects even decades later.

Japan, the only nation that experienced an atomic bombing, has not joined the TPNW and opted out of attending the meeting in Vienna as an observer.

In Tokyo, Chief Cabinet Secretary Hirokazu Matsuno played down the significance of the treaty on June 21, pointing out that none of the nuclear powers have ratified it.

He said Japan will aim at producing “meaningful results” in the review conference of the older Nuclear Nonproliferation Treaty (NPT) in August, which it signed in 1970.

The TPNW meeting is expected to discuss the disposal of nuclear arms and verifications as well as how to draw more states to ratify the treaty and how to complement the NPT.

(This article was written by Gakushi Fujiwara and Jun Takaku.)