Tokyo Olympic committee lauds its own efforts to host Games 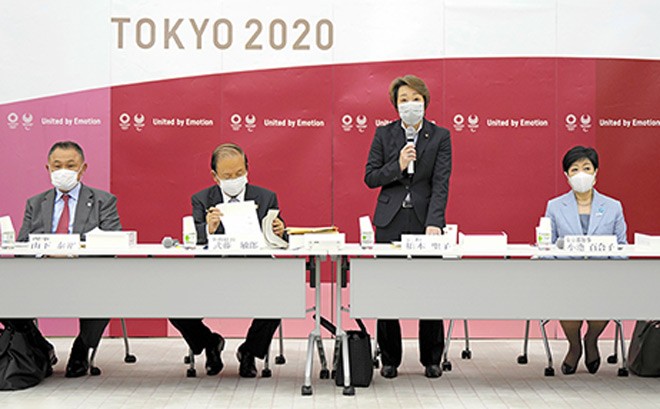 Seiko Hashimoto, second from right, speaks during a board meeting of the Tokyo Organizing Committee of Olympic and Paralympic Games on June 21 at the Tokyo metropolitan government building. (Pool)

The Tokyo Organizing Committee of the Olympic and Paralympic Games released an official report on June 21 on hosting the 2020 Games, patting itself on the back as one of its final acts before it disbands.

The self-congratulatory report paints the mega-sporting event--which was dogged by scandals, delays and uncertainties before being held in the midst of an ongoing pandemic--as a ray of light in dark times.

But it fell far short of telling the entire story about the full cost of the Games, and many of the records detailing the planning and spending are set to be stored for the next decade with unlikely prospects of ever being made public.

“We had much to worry about, but we were able to host the Games, together with related organizations as one, with years of preparations and a sense of commitment to the work,” Seiko Hashimoto, the head of the committee, said at a news conference after the final board meeting.

The 450-page report said the ability of the organizers to operate the Games without causing a cluster infection “received high evaluation and praise that it was only possible by Tokyo and Japan.”

The report also praised the organizers for how they dealt with the year-long postponement of the Games due to the pandemic and how they “simplified the Games without making exceptions.”

According to the report, the organizers were successful in “steadily driving forward” their efforts to restore the nation from the 2011 Great East Japan Earthquake, tsunami and nuclear disaster.

The report touched on the numerous difficulties and scandals that rocked the international sporting event, but glossed over inconvenient details.

Referring to the alleged plagiarism over the Games’ logo, the report said there was an “unclearness and penchant for backroom deals in the selection process.”

The report also mentioned the fact that key officials who were part of the Opening and Closing ceremonies quit at the last minute due to their past offensive remarks and scandalous behavior.

But the report summary defended that the incidents “not only provided an opportunity for the organizers to reaffirm the importance of diversity and unity, but also activated discussion throughout the entire Japanese society.”

Regarding the resignation of Yoshiro Mori from the head of the committee over his misogynistic remarks, the report only stated that he “vowed to resign to take responsibility for the chaotic situation caused by his own remarks regarding gender.”

The report did not explain the “chaotic situation” at all, like when many volunteers and torch relay runners canceled their participation in the Games over it.

It did not detail the decision-making process regarding the postponement, either.

The report also made no reference to Tsunekazu Takeda, ex-chief of the Japanese Olympic Committee, who is under a bribery investigation in France over Tokyo winning the bid to host the 2020 Games.

Much of the information the committee is leaving behind about the scandal-ridden, pandemic-era Games will seemingly never see the light of day.

It is unlikely that all the contract papers and related documents that detail the preparations and operations of the committee will be made available to the public in the future, because the freedom of information system does not apply to the committee, which is a public interest incorporated foundation.

Legally, a public interest incorporated foundation must store important documents regarding its operations. But it is up to the foundation to decide which document is important.

In addition, there is no system that allows third parties to request the information be disclosed.

Designated officials will be responsible for storing such documents for 10 years after the committee is disbanded.

But there is no guarantee that they will grant any disclosure requests.

The committee on June 21 said the public will not be allowed to see any such stored documents in general, but some will be passed down to the JOC and made available for inspection under certain conditions.

(This article was written by Ryosuke Yamamoto and Yoshitaka Unezawa.)