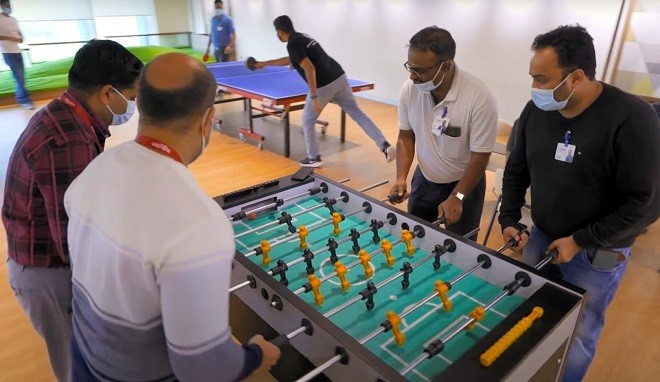 Facing a serious labor shortage in the information technology (IT) sector, Japanese companies such as Mercari Inc. have turned to India--an IT superpower--to secure digital talent.

Mercari, which operates leading flea market app Mercari, decided to establish a local subsidiary in Bengaluru in southern India, known as a hub for IT firms.

The company plans to set up a development base in or around summer this year, with the intention to recruit 50 to 60 workers over the next year.

However, Japanese firms have to vie with U.S. IT giants, which use their name recognition and high wages to attract Indian engineers.

Forced to fight an uphill battle, Japanese companies like Mercari are setting up bases in the country and promoting worker-friendly workplaces to attract their attention.

Mercari intends to recruit IT workers as it seeks to raise its profile in India.

Along with other companies, it has been difficult for Mercari to receive talent from overseas due to border control measures against the novel coronavirus over the past two years or so.

But if it sets up a base in the country, it would be easy for the company to recruit professionals who will be working in India without having to relocate to Japan.

Mercari started a full-scale effort to recruit overseas talent in 2017, with foreign nationals accounting for half of its engineers working at its Tokyo office.

In India, the company has recruited a total of about 45 new graduates from the Indian Institute of Technology (IIT).

The IIT is the country's most prestigious national university in the field of technology, with Sundar Pichai, chief executive officer of Google LLC, and other world-class IT professionals included among its alumni.

CEO and Chairman Hiroshi Mikitani boasted during the entrance ceremony held this spring that Rakuten recruited 156 or so IIT graduates this year, outnumbering those employed by Google, Facebook or Microsoft Corp.

Rakuten opened a base in Bengaluru in 2014.

Initially, there were only six engineers working for Rakuten in India.

With the previous office becoming too small to accommodate an ever-increasing number of employees, Rakuten set up a new office in a high-rise building in February this year to increase recreational facilities for workers, including a free cafeteria and a sports gym.

Currently, Rakuten and its group companies have about 4,500 employees in India.

Japanese companies have become increasingly digitized due to the COVID-19 pandemic, leading to further labor shortages.

According to a survey by doda, a recruitment site operator, the monthly jobs-to-applicants ratio among engineers and other tech professionals was 3.44 in March 2019.

But the figure rose to 9.54 in March this year.

According to the Japan External Trade Organization (JETRO), many companies have traditionally recruited IT workers from China and Vietnam because the two countries are located close to Japan and there are many fluent Japanese speakers.

But in recent years, domestic companies have turned their attention to India for its large population of IT workers and bolstered their recruitment efforts.

I'mbesideyou Inc., a Tokyo-based company that offers an artificial intelligence (AI)-based video analytics service, set up a base in Hyderabad last year.

"It is necessary to establish a base to show how serious we are and manage talented workers living there," said President Shozo Kamiya.

The company held explanatory sessions at IIT schools across India and offered internships.

The firm gained a growing reputation through word of mouth on social media, while it received applications from more than 3,000 people for this summer's internship program for 40 to 50 interns.

Demand for IT personnel has increased around the world, with talented students being much sought after.

The IIT is inundated with job offers from companies from around the world.

U.S. tech giants such as Google, Apple, Facebook and Amazon, known collectively as GAFA, take advantage of their name recognition and big paychecks to recruit IT experts.

"A survey conducted last year also showed that the United States, after all, is a popular place to work among students and they have little recognition of Japanese companies," said Kotaro Kataoka, an associate professor at the IIT Hyderabad.

He added that Indian students also place importance not only on salaries but also on their future growth and the companies' prospects.

"They may change their evaluation if Japanese companies show a strong vision, as well as an outstanding technology or career path," Kataoka said.