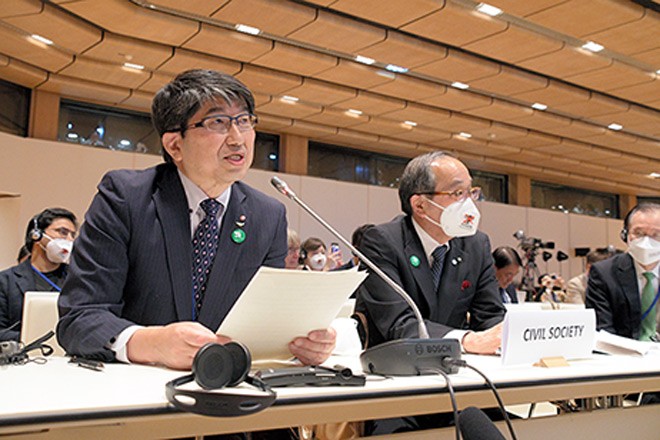 Tomihisa Taue, left, mayor of Nagasaki, and Hiroshima Mayor Kazumi Matsui at the first meeting of state parties to the U.N. Treaty on the Prohibition of Nuclear Weapons in Vienna on June 21 (Tabito Fukutomi)

VIENNA--The mayor of Hiroshima underscored the urgency of making the U.N. nuclear ban treaty a reality in light of Russian President Vladimir Putin’s repeated threat to use nuclear arms since Russia’s invasion of Ukraine.

“Making progress in nuclear disarmament and the abolition of nuclear weapons is the only solution,” Kazumi Matsui said at the first meeting of the U.N. Treaty on the Prohibition of Nuclear Weapons on June 21, in response to Putin’s threat. “Each country and each society need to come together to start with efforts soon to make the treaty viable.”

Matsui spoke as the head of the Mayors for Peace, an international nongovernmental organization.

He also said atomic bomb survivors are sympathetic toward Ukrainian civilians who have been suffering from Russian aggression as they do not want to see anyone else experiencing the horrors of war.

Nagasaki Mayor Tomihisa Taue, who also spoke at the opening session, said the importance of the TPNW is becoming extremely greater, given the current crises in the world.

He said the TPNW is the only answer the world has now to deal with the clear and present danger.

“Let us spread the chain of determination to never allow the use of nuclear weapons throughout the world,” Taue said.

After the meeting, Matsui told reporters that the global community needs to share the recognition that nuclear arms can destroy the entire world.

Taue said he was “very sorry” about Japan’s absence at the meeting and called on the Japanese government to attend future sessions under the observer status.

(This article was written by Mami Okada and Tabito Fukutomi.)