Utilities to offer points programs for those who conserve power 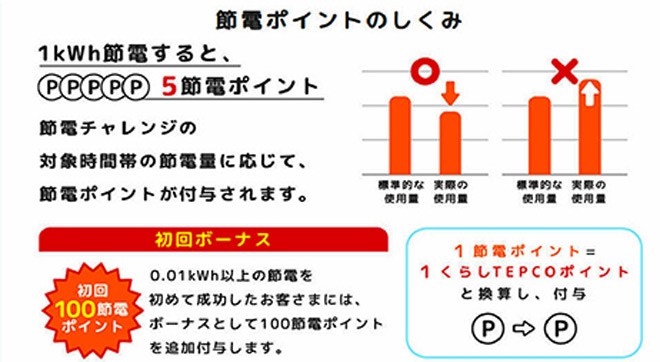 Gas and electric utilities will offer points programs to households that conserve power this summer when supply shortages are expected.

Some companies will even offer points to those who spend a portion of the day or evening in an air-conditioned venue such as a commercial facility, which will automatically result in lower household usage.

Points can be accumulated and converted into gift certificates to be used for shopping with Amazon and other online sites.

Tokyo Gas Co. on June 21 opened a special page on its website where customers can register for its points program.

Once registered, customers will receive an email the day before warning that an electricity crunch is expected. The message will request that the thermostat for the air conditioner be set higher to conserve electricity.

Based on past electricity usage, a standard usage volume will be calculated for each household. Points will be awarded when a household uses less than the standard volume.

Points worth 5 yen will be awarded for conserving 1 kilowatt-hour of electricity, which can be achieved by raising the thermostat from 26 to 28 degrees and maintaining that temperature for nine hours.

Company officials said a similar campaign last summer led to electricity savings per household of between 15 and 50 kilowatt-hours a month.

The electricity fee for households is about 30 yen per kilowatt-hour, so conserving similar levels of electricity will not only lead to cuts in electric bills of between 500 to 1,000 yen ($3.70 to $7.20), but also points equivalent to up to several hundreds of yen.

Customers have until July 18 to register for the program that runs from July 27 until Sept. 23.

“While conservation may have had a negative connotation in the past, this will allow people to contribute to society in a manner, sort of like playing games,” a Tokyo Gas official said. “We earnestly hope that as many people as possible will take part.”

TEPCO Energy Partner Inc. has a similar program that will run from July 1 until Sept. 30 and be a first for households.

Previously, it operated a program that provided discounts to corporate customers that conserved electricity. Under the new system, a point equivalent to 5 yen will be awarded for every kilowatt-hour conserved. The points can be exchanged for Amazon gift certificates or point programs at other retail outlets.

Hokuriku Electric Power Co.’s program will boil down to a competition among households over which ones conserve the most electricity.

Those who make the list of the top 400 households conserving electricity will receive points that differ by ranking. The points can be converted into gift certificates.

SB Energy Corp., a subsidiary of Softbank Group Corp., will cooperate with upstart electric power companies to provide points to customers who leave their homes and spend time in the coolness of commercial outlets.

A request will be sent to users through a Line account to gather at certain facilities for a specified period of the day. GPS data on smartphones will be used to track the movements of the individuals to tot up points earned.

(This article was written by Junichi Miyagawa and Hisashi Naito.)