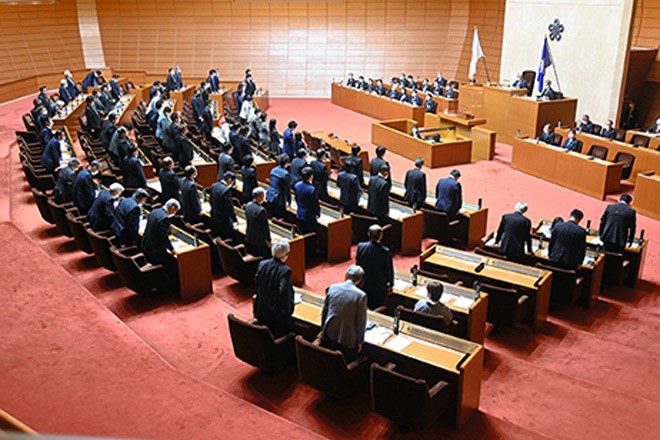 The Fukuoka prefectural assembly passes an anti-harassment ordinance by a majority vote in Fukuoka on June 21. (Takero Yamazaki)

FUKUOKA--The first prefectural ordinance in Japan designed to prevent harassment against assembly members committed by their colleagues passed by a majority vote in the Fukuoka prefectural assembly on June 21.

The anti-harassment ordinance is also aimed at protecting the secretaries and staff of assembly members, as well as those running for assembly, against harassment. That includes abuse from constituents, such as instances where politicians feel they cannot fight back for fear of losing votes.

The measure, expected to take effect in April 2023, is the first of its kind even at the municipal level, according to sources.

The new rules define harassment as “remarks or actions by those who take advantage of their commanding position that go beyond the scope that is necessary and reasonable and cause harm to victims’ (working) environment, including political activities.”

According to the new ordinance and prefectural assembly members, the assembly’s secretariat will get a new consultation division so that lawyers and other outside experts can interview victims of sexual, power and maternity harassment, as well as those who have suffered abuses from voters.

Members of municipal assemblies in Fukuoka Prefecture can also consult with those experts.

When the experts investigate and determine that a particular case requires a response, the prefectural assembly chair will share the matter at a meeting of representatives from the assembly’s major parliamentary groups.

The chair can then issue alerts and recommendations for improvement and make the case public.

“Ahead of next year’s unified local elections, we need to quickly create an environment where anyone can run for public office regardless of their gender,” said Haruka Yoshimura, a prefectural assembly member who belongs to the Liberal Democratic Party and headed a committee that reviewed the draft ordinance.

In a survey by the Cabinet Office in fiscal 2020, 42.3 percent of local assembly members said they were harassed by their colleagues, supporters or constituents. The survey also showed 57.6 percent of female respondents suffered such harassment--far exceeding the figure for men, at 33.5 percent.

She said harassment is a major factor for women, in particular, in giving up on running in local assembly elections, resulting in the low percentage of female assembly members.

She expressed hope that more local assemblies will take measures against harassment.

But she expressed concerns whether the ordinance can prevent political intervention in dealing with individual cases.

“It is crucial to ensure the involvement of a third party in the process to make victims feel safe in consulting about their problems,” she said.