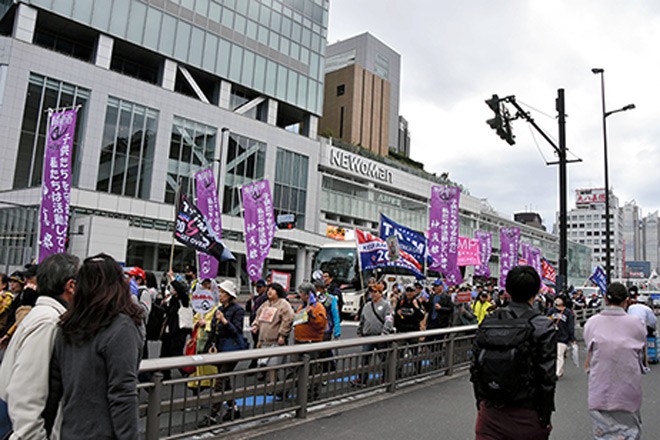 The Tokyo Metropolitan Police Department has investigated the group and has so far arrested eight members on suspicion of unlawful entry into a vaccination clinic in Shibuya Ward.

The group has spread misinformation on its website, such as, “the coronavirus, itself, does not exist” and “the vaccine contains an infection source, a seed of a disease that generates a harmful effect on the body.”

The group has also held rallies with the message, “The lives of children have been lost because of the vaccine.”

After the members’ arrests, the group protested in front of a police station and said: “Police officers are made of rubber. We can get rid of them with pine resin.”

Wary the group might be becoming militant, police have sought to get a better grasp of its activities.

A 43-year-old former actor has formed, along with several senior members, a unit called “enforcement and control division” and made decisions on the group’s policies and activities, according to sources.

Under that unit, multiple units have been formed to plan rallies and anti-vaccine demonstrations, among other things.

One such unit is dedicated to a so-called “development" project.

The unit is tasked with relocating the group’s members to remote areas in the countryside and building a living community called “Eden,” where the members grow crops and spread the group’s messages.

Such projects have been spread across several prefectures, including Yamaguchi, Iwate, Kyoto, as well as in the Aso region in Kumamoto Prefecture.

The group collects membership fees from its members and spends the money on anti-vaccine rallies and the relocation project.

Police have seized smartphones and computers from the group’s office and found that the group received a big donation of tens of millions of yen.

The group uses social media with a chat function to communicate with each other, exchange information and recruit new members.

Police have analyzed the history of such communications, checking them from the arrested members’ statements, and have concluded the former actor and another man are the co-leaders of the group.

It remains unknown how many formal members the group has, but police believe 6,000 or so people attended a rally held in January.

Since the arrest of the members who illegally entered a vaccination site, however, some members have left the group, police said.