VOX POPULI: Recalling Battle of Okinawa via the stark account of a U.S. Marine 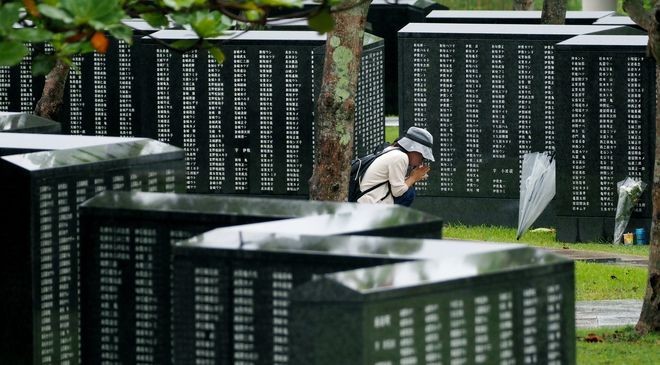 A visitor prays on June 23, 2021, in front of the Cornerstone of Peace in Itoman, Okinawa Prefecture, on which the names of the war dead are engraved. (Asahi Shimbun file photo)

More than 200,000 people perished in the Battle of Okinawa, and the name of each person is engraved on "Heiwa no Ishiji" (the Cornerstone of Peace) in the Peace Memorial Park in Okinawa Prefecture.

Erected on Mabuni Hill in the city of Itoman to honor all victims regardless of their nationality, the monument includes the names of more than 14,000 U.S. soldiers.

They were young Americans who either volunteered for service or were drafted and ended up in Okinawa.

Eugene B. Sledge (1923-2001), a U.S. Marine who survived the battle, chronicled his experiences in his 1981 memoir, "With the Old Breed: At Peleliu and Okinawa." (The Japanese translation, "Periryu Okinawa Senki," was published by Kodansha Ltd. in 2008.)

To cope with the terrifying reality of living in a combat zone, Sledge constantly told himself it wasn't a reality and that he was only having a nightmare which he would awake from soon and find himself in a different place.

He would be immediately dragged back to reality, however, by the unmistakable stench of death from the rotting human flesh of his fallen brothers-in-arms as well as of enemy combatants.

Any of those abandoned corpses could be him in the next moment, he thought.

He kept firing mortars, knowing that could make him a target of Japanese troops. As he advanced, a bullet grazed his head and a comrade near him fell.

His relentlessly stark narrative of the kill-or-be-killed reality includes a scene where an American soldier shot dead a Japanese civilian.

After the war, Sledge was tormented by repeated nightmares, triggered by his high-pressure combat experiences.

"War is brutish, inglorious and a terrible waste,” he wrote.

Such an observation must have come from his recollection of the extreme circumstances he lived through.

Unable to end an insane war it started, Japan used Okinawa to buy time and delay the anticipated final battle on the mainland.

Every person killed in the Battle of Okinawa had a name and a life they were meant to live out.

That goes for every war.