Hibakusha calls for abolition of nuke weapons at TPNW meeting 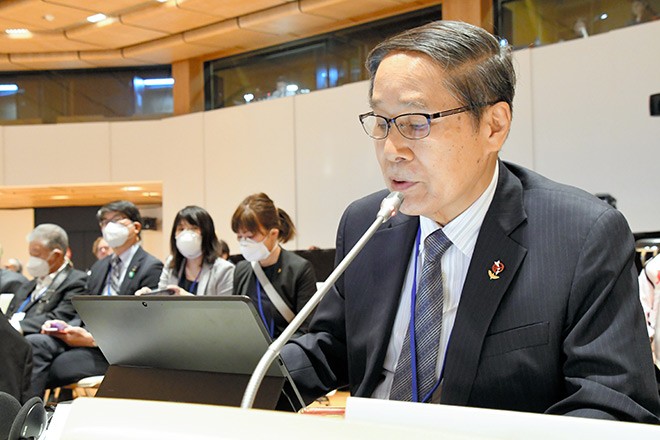 Masao Tomonaga, a hibakusha of the 1945 Nagasaki atomic bombing, gives a speech at the first meeting of state parties to the U.N. Treaty on the Prohibition of Nuclear Weapons in Vienna on June 22. (Mami Okada)

VIENNA--A man who survived the 1945 Nagasaki atomic bombing pleaded with representatives at a U.N. nuclear ban treaty session here on June 22 to abolish nuclear weapons before all hibakusha like himself are gone.

Masao Tomonaga, 79, a doctor, spoke at the first meeting of state parties to the U.N. Treaty on the Prohibition of Nuclear Weapons.

Tomonaga described the inhumanity of atomic bombs by saying that hibakusha have to be concerned for life of possible health effects from their radiation exposure.

“We hibakusha never have a calm period relieved from the long-lasting anxiety of cancers and other diseases,” he said.

Tomonaga spoke in English in the conference hall packed with representatives from various countries and nongovernmental organizations.

He survived the bombing aged 2 at his home, which was 2.5 kilometers from ground zero. He has no memories of the bombing.

The blast destroyed the Japanese wood-frame house he and his family were living in but his mother rescued him from the ruins.

When Tomonaga was in high school, an increasing number of young hibakusha started developing leukemia, possibly due to their radiation exposure in the bombing.

That worried him about developing the cancer himself and this dread made him decide to become a doctor.

He entered the school of medicine at Nagasaki University and dedicated himself to studying post-atomic bomb effects such as cancers.

What emerged in his studies was that radiation exposure makes hibakusha suffer their entire lives.

Cases of leukemia spiked among those exposed when they were young.

Later, they are at a higher risk of developing cancer than those who were not exposed to the bomb.

In his speech, Tomonaga stressed, “We have always overcome such atomic bomb-related obstacles to re-establish our lives.”

He also referred to studies showing a possibility of radiation exposure causing genetic damage, adding, “We would like to pray for the halt of radiation effects on our descendants.”

Tomonaga said that hibakusha, whose average age is now 84, were very happy to see the TPNW, which was adopted by a United Nations conference in 2017 and entered into force in 2021.

However, “We hibakusha were disappointed” because not only nuclear nations but also their allies haven’t signed the treaty, he said.

One of those non-signatories is Japan, which, despite being the only country to have been attacked with atomic bombs, is under the nuclear umbrella of the United States, he pointed out.

Before all hibakusha are gone, he said, the world needs to overcome this sad contradiction and huge obstacles to realize a nuclear-free world.

He called on the TPNW signatories to have a dialogue with nuclear-armed powers and countries dependent on their nuclear weapons such as Japan, and to pressure them to sign the treaty.

Attendees applauded Tomonaga when he finished his speech.

“I expressed directly how I feel as a hibakusha. I wanted to say that unless nuclear nations and non-nuclear nations have a dialogue, nuclear nations will never understand the true meaning of the treaty and sign it,” he told The Asahi Shimbun afterward.