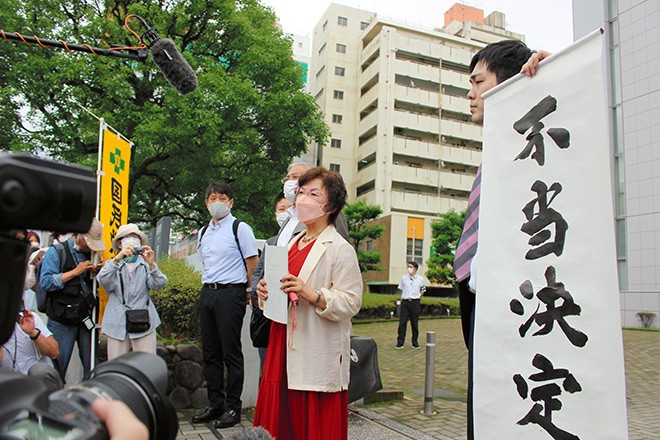 Yumi Kamoshida, one of the lawyers for Ayako Haraguchi, calls the Kagoshima District Court’s decision to deny her client a retrial “unacceptable” in front of the court on June 22. (Shinya Maeda)

KAGOSHIMA--A court here denied a fourth request for a retrial from a 95-year-old woman who served a 10-year prison term for a murder she has long claimed she never committed.

The Kagoshima District Court on June 22 said the new evidence provided by the defense team of Ayako Haraguchi was “not enough to acquit her.”

“I was anxiously awaiting today’s ruling, so I’m very disappointed,” said Haraguchi’s daughter Kyoko, 67, who filed the retrial request in 2020.

“My mother has kept claiming her innocence. I want the court to listen to her heartfelt plea,” Kyoko said in tears.

Haraguchi was found guilty of murdering her brother-in-law in 1979. Her prison sentence was finalized two years later.

After her release in 1990, she tried three times to get a retrial. The Supreme Court in June 2019 rejected her third retrial request.

According to the ruling in her trial, the 42-year-old brother-in-law got drunk, was involved in a bicycle accident and fell into a ditch in October 1979.

Roughly two and a half hours later, two neighbors found him lying on the road and carried him on the back of a lightweight truck to his home, where he was strangled to death by his relatives, according to the ruling.

Haraguchi and two of her relatives, including her former husband, were accused of murder. Another relative was accused of abandoning the body in a pile of fertilizer in a barn near the victim’s home.

All of the suspects--except Haraguchi--confessed to the crime, which was the key evidence that led to their convictions.

But the three relatives, who were intellectually impaired, later said they had been coerced into confessing.

One of them was a paramedic’s assessment of photos of the autopsy of the victim’s body.

The paramedic determined that the victim died of acute necrosis of the intestinal tract, concluding that when he was driven to his home, the man was likely already dead from a cervical spinal code injury suffered in the bicycle accident.

The other new evidence was an analysis of testimonies by the two neighbors who had taken the victim to his home. They said the man was still alive when they left him there.

The defense team argued that their testimonies were not credible.

The Kagoshima District Court dismissed the defense team’s claim that the man died from the accident, not strangulation, saying that theory is based on deductions drawn from limited information obtained from the autopsy photos.

The court noted that it cannot rule out the possibility that the victim died from cervical spinal code injury.

But it ruled that the two new pieces of evidence were not enough to overturn the ruling finalized in 1981, concluding that the two neighbors’ testimonies were reliable enough.

The defense team plans to appeal the ruling by June 27.