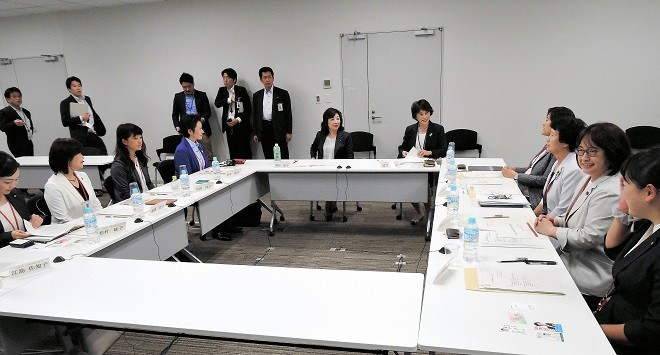 Female local politicians exchange opinions with Seiko Noda, left in the back row, state minister in charge of gender equality, in Tokyo in May 2018. (Asahi Shimbun file photo)

Local politicians across Japan feel that more needs to be done to help women enter and remain in politics, from combatting sexual harassment to beefing up maternity leave policies, according to a new survey.

And assemblymen pointed to another obstacle they think is preventing women from breaking the glass ceiling: The views of their own supporters.

“Women are forced to bear many burdens and only superwomen can become politicians as a result,” said Kazunori Kawamura, an associate professor of politics at Tohoku University, who carried out the study.

He said the findings suggest that local politicians clearly understand that insufficient steps have been taken so far to eradicate sexism and improve child-care services available to sitting female politicians.

“The trend likely arose from the heightened awareness of sexual discrimination and harassment among members who reached adulthood after the Equal Employment Opportunity Law’s introduction and they are playing an increasingly important role in regional assemblies,” said Kawamura.

The study revealed that male assembly members are concerned their supporters would balk at the prospect of a woman taking over for them in their role--likely motivating some politicians to select other men as successors instead of qualified women.

The survey was conducted from January through March as part of efforts to promote gender equality in politics.

Questionnaires were sent through assembly secretariats nationwide by mail to 18,967 local assembly members in all cities, as well as Tokyo’s 23 wards, and netted 7,704 valid responses, or 41 percent.

Respondents were asked in the study to choose one or more proposals from 10 choices that they consider “effective for increasing the number of local assemblywomen.”

The most chosen option, at 47 percent, was “enhancing maternity leave and maternity allowance,” followed by 43 percent of respondents who said that “countermeasures should be implemented to stop sexual harassment from occurring in assemblies.”

The survey asked how they feel about this statement: “Many voters contend serving as assembly members should not be used by women as an excuse for not paying careful attention to household chores and child care.”

The degree of approval was rated on a seven-point scale. A majority of 75 percent “strongly agreed,” “agreed” or “somewhat agreed” with the statement.

As many as 46 percent agreed that “female politicians need to work harder than their male counterparts so that they will achieve success in politics,” while 36 percent disagreed.

Given that women account for less than 20 percent of assembly members in all the surveyed cities and wards, respondents were told to rank their willingness to select qualified people to replace them regardless of their gender.

As many as 67 percent said gender does not matter, while 18 percent said they are “somewhat” agreeable to the idea.

But 32 percent of those indifferent to gender argued that “persuasion will be required for female successors to be accepted” by their senior supporters in constituencies.

Kawamura noted that male assembly members made up a large portion of the respondents, and that many assemblymen feel their constituents would react negatively to being represented by women.

“Politicians appear to harbor fear in their hearts that their backers may not help female successors,” he said. “Considering the trouble of persuading supporters, they may select men more frequently than women as replacements to avoid difficulties.”

Kawamura said many assemblymen believe their constituents continue to share the view that women cannot do well in politics.

He said elevating the status of women in local communities will help increase the number of women in the political arena.

“To eliminate the preconception linked to women, it will be essential to give titles to women by having them play roles traditionally dominated by men in communities, such as agricultural commissioners and neighborhood association heads,” he said. “That will lead to an environment where constituents will more willingly back women.”