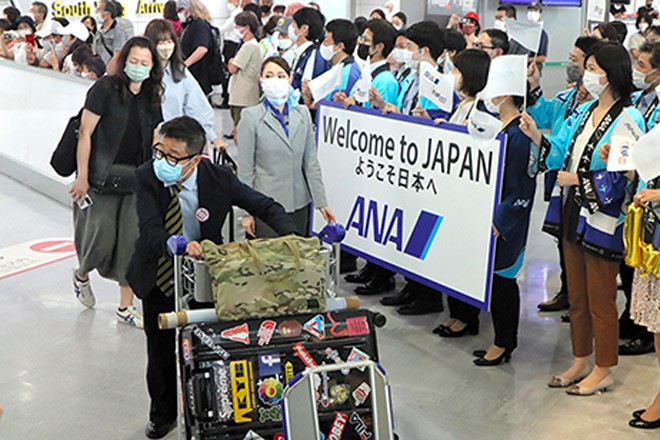 Staff from All Nippon Airways Co. welcome travelers from Hong Kong on a group tour at Narita Airport on June 22. (Yoshiko Aoyama)

NARITA, Chiba Prefecture--Travelers from Hong Kong on a group tour arrived in Japan on June 22, becoming the first to enter the country from the region for sightseeing in more than two years.

Staff from All Nippon Airways Co. welcomed their arrival at Narita Airport. The tourists plan to visit Hokkaido and Tokyo for seven days and six nights while taking precautions against the novel coronavirus.

An EGL Tours official said the agency started selling package tours to Japan, which will be limited to those accompanied by tour conductors for the time being, soon after the Japanese government announced its resumption of accepting foreign tourists.

Polo Wong, a 53-year-old tour conductor accompanying the 10 travelers, expressed gratitude to the customers, who joined the tour despite strict restrictions on movements, including one week of self-quarantine at a hotel in Hong Kong after returning from Japan.

One participant of the group tour graduated from a university this month. The 23-year-old woman said she applied for the tour because she wanted to visit Japan before starting her career.

She said she is excited at coming to Japan for the first time in two and a half years. She added that she plans to eat a bowl of rice topped with fresh seafood in Hokkaido and buy clothing and cosmetics in Tokyo by taking advantage of the recent depreciation of the yen.