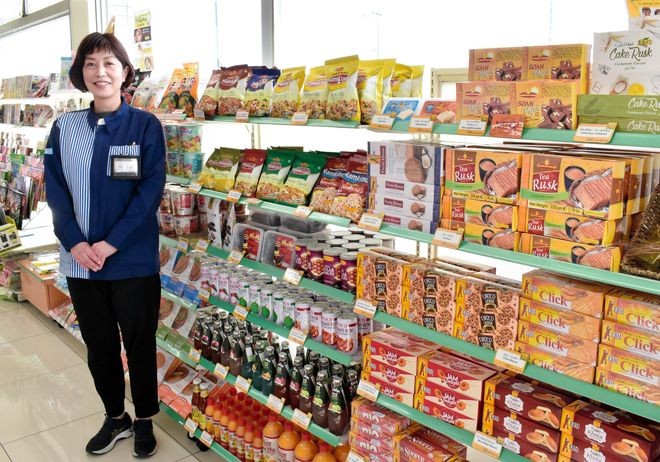 Takako Kadoshima, manager of Lawson’s Shinminato-Tsubatae store in Imizu, Toyama Prefecture, stands by shelves lined with halal products, to which many have been added due to the “surprisingly huge response” despite the initial plan to offer a smaller number of items there. (Kazuhiro Takeda)

IMIZU, Toyama Prefecture--When Takako Kadoshima took over as manager of a Lawson convenience store here five or so years ago, she noticed a peculiar shopping practice among her customers.

She became aware that young shoppers were checking the instant noodle products’ labeling for ingredients they are prohibited from consuming.

Pork and other banned ingredients are contained in many food items, so they could purchase only a limited number of products at the store.

“Convenience stores are convenient for us but that is not the case for Muslims,” Kadoshima, 48, recalled thinking.

Today, her Lawson store is selling food items prepared according to Islamic law in this major residential area for Pakistani residents of Japan.

Though the outlet used to be no different than other Lawson outlets elsewhere in the nation, the store is now catering to the needs of Muslims.

Located in western Toyama Prefecture, an area home to the convenience store in Imizu is so famed for its unique culture long nurtured with many local Pakistani that it is dubbed "Imizu-stan."

All those items are certified as halal in their producing countries. The shelves were installed in August last year.

Kadoshima said her store initially handled 15 kinds of halal items, such as cookies and instant noodles.

After a rusk to be combined with chai, chicken bouillon and pomegranate juice were added in response to customer's requests, the number of halal products reached as many as 51.

“I asked customers what they want one after another,” said Kadoshima.

The Shinminato district of Imizu has a large Pakistani population, earning itself the nickname selected in tribute to Pakistan.

As Imizu hosts Toyama New Port, Pakistanis are said to have started migrating to Shinminato en masse in the hopes of exporting used cars to Russia.

The 420 Pakistani residents of Imizu represents the largest number among all municipalities in Toyama Prefecture as of Jan. 1.

Many restaurants serve Pakistani dishes there and a mosque stands across from the convenience store.

Soon after becoming a manager of this convenience store, Kadoshima began considering whether her outlet could provide halal goods to meet the needs of the Pakistani residents. But she failed to find suppliers in the prefecture and dropped the plan at the time.

The turning point came in February last year, when Akram Mohammad Saad, 19, whose parents hail from Pakistan, joined her store’s staff as a part-timer. Like other Pakistanis, Akram was seen examining products one by one closely to confirm if they are free from prohibited ingredients.

The sight reminded Kadoshima of her once-scrapped endeavor to make her own shop friendlier to Islamic worshippers.

Kadoshima afterward learned that a Lawson outlet in Tokyo handles halal products and considered whether it was possible to procure those items for a store far from Tokyo.

With the help of her eldest daughter living in the capital who is attending college there, Kadoshima held talks with a supplier of halal goods.

There were questions over how many would sell and how much food should be secured as the first step. The most grave was whether the headquarters of Lawson Inc. would give the green light to the plan.

Although Kadoshima was “concerned” about the problem, an official at the company’s main office she contacted told her that she “should take the plunge,” giving the store manager an encouraging nudge.

Customers’ responses were far more enthusiastic than expected. A shopper called what she started offering “fantastic,” while another expressed gratitude to Kadoshima for “doing us such a favor.”

Hearing those words of appreciation from Muslims, Kadoshima felt satisfied with the outcome of her efforts.

“There being convenience stores is taken for granted,” said Kadoshima. “We rarely receive gratitude from customers just by preparing certain products. I am happy with what we achieved.”

Working with Akram enabled Kadoshima to learn to differentiate between permitted items for Muslims and forbidden ones. Some gelatin and emulsifiers, for example, come with pork-derived ingredients.

Details are unknown for some products, but Kadoshima is always careful to share all specifications of those items, including the fact that their nutrient information is unclear, with customers.

The efforts arose from her philosophy of “valuing interactions with our patrons.”

Recently, Muslims have asked the operator to offer halal bento meals since that type of product is a staple at convenience stores. With their expectations in mind, Kadoshima is toying with what steps to take to sell halal boxed meals at her shop.

According to Lawson, two outlets each in Osaka and Gifu prefectures procure halal products through the company’s goods supply network. Some 10 stores nationwide prepare Muslim-friendly items by themselves like the Shinminato-Tsubatae shop.

“Such offerings cannot be provided everywhere because of the difficulty in procurement,” said a Lawson representative. “Explanations and other forms of communication with customers are likewise important.”

Do other leading convenience store chain operators have similar offerings?

FamilyMart Co. said halal goods cannot be purchased at any of its outlets. There reportedly is no plan to put them on sale at present.

Seven-Eleven Japan Co. test-sold halal products in a region in the past, but no outlets currently deal in such items.