Pavilion for Osaka expo to give underwater atmosphere 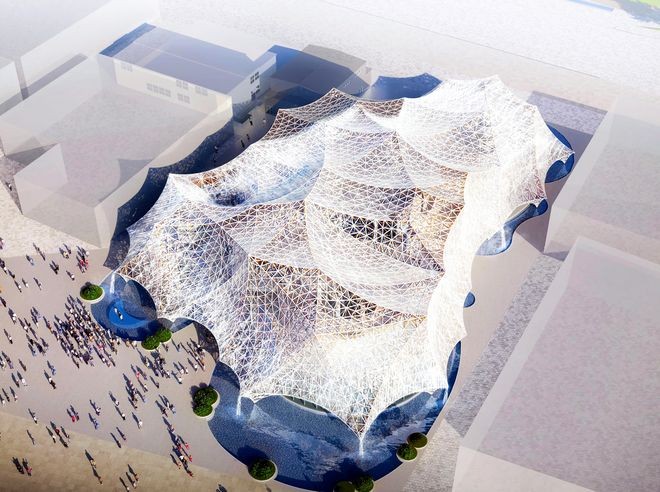 An artist’s rendition of the Osaka Pavilion, which will have water running on its roof to create an underwater-like ambience (Provided by the Osaka pavilion executive committee)

OSAKA--The pavilion for the 2025 Osaka Kansai Expo will be designed to give visitors a feeling that they are under water.

A preview of the design showed that water will run through a transparent roof while the interior will be arranged in a way that allows breezes to blow through.

The pavilion executive committee, which consists of such entities as Osaka Prefecture and Osaka city, released the fundamental blueprint at a general meeting on June 17.

The Osaka Pavilion will be built near the tentatively named Yumeshima Station on the planned extension of the Osaka Metro Chuo Line.

The prime location is near the entrance to the expo site and is expected to draw many visitors.

Under the concept of “reborn,” the pavilion’s main building will have two above-ground stories with a total floor space of 6,300 square meters.

Wood and steel will be used for the structure’s roof frame, with transparent glass to allow natural light to shine through.

The rooftop will also feature a hole for air circulation inside the pavilion, while water supplied to the upper covering will help to create an underwater-like atmosphere.

Exhibition corners will reportedly be connected with ramps for better accessibility.

The June 17 meeting also reaffirmed plans to establish an organization that will be responsible for the pavilion’s construction and management. It was set up on July 1 and is headed by Osaka Mayor Ichiro Matsui.

As planned, private co-sponsor companies will likely raise 8 billion yen ($59.3 million) of the 16 billion yen needed to construct the pavilion. The remaining half will be covered by Osaka Prefecture and Osaka city.