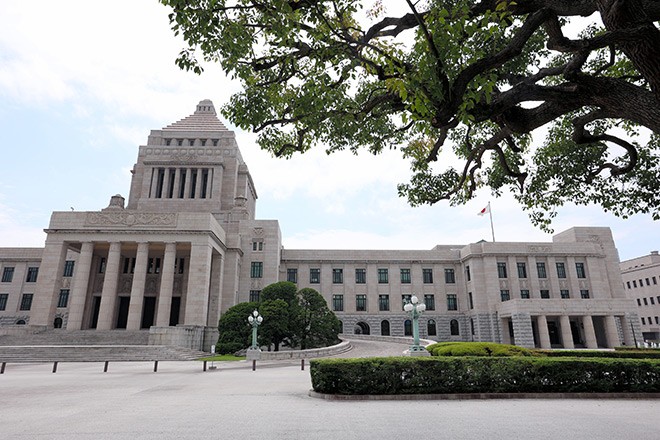 The Upper House chamber stands to the right of the central tower of the National Diet building. (Koichi Ueda)

The latest figure is the largest over the 20 years of similar surveys conducted ahead of national elections.

The survey was conducted by The Asahi Shimbun and a team led by Masaki Taniguchi, a professor of political science at the University of Tokyo.

Questionnaires were mailed from mid-May to 545 candidates, and responses were received from 512 by the evening of June 22.

Candidates were given five choices to questions about strengthening defense and revising the Constitution: favor, somewhat favor, neither, somewhat oppose, and oppose.

Among candidates of the ruling Liberal Democratic Party, a record 99 percent were in favor or somewhat in favor of strengthening defense. That was even higher than the 95 percent in 2013 when the Upper House election was held under then Prime Minister Shinzo Abe.

A similar trend was found among candidates of junior coalition partner Komeito, which had long prided itself on being a pacifist party.

Although only 13 percent were in favor of such a change in defense three years ago, the figure skyrocketed to 83 percent this time around.

Among candidates of the main opposition Constitutional Democratic Party of Japan, those in the favor of strengthening the nation’s defense increased from 2 percent three years ago to 31 percent.

Similarly, the figure rose from 67 percent to 89 percent among candidates of Nippon Ishin (Japan Innovation Party), and from 21 percent to 95 percent for the Democratic Party for the People.

Candidates were also asked whether Japan should possess the capability to strike enemy bases when there was the possibility that they could attack Japan.

Among candidates of the LDP, which included possessing that capability in its campaign platform, 77 percent were either in favor or somewhat in favor.

But the figure was only 4 percent among Komeito candidates, with 75 percent saying neither and 21 percent either opposed or somewhat opposed.

On the question about constitutional revision, 61 percent of all candidates either favored or somewhat favored such a move, a large increase from the 44 percent of three years ago.

Candidates were also asked how the Constitution should be amended. The largest ratio, at 66 percent, said the legal existence of the Self-Defense Forces must be defined.

Among Komeito candidates, the percentage of respondents choosing neither dropped from 74 to 50, while those favoring such a move surged from 17 percent to 42 percent.

(This article was compiled from reports by Nen Satomi and Yoshitaka Isobe.)