Lost USB devices with data of all Amagasaki residents found 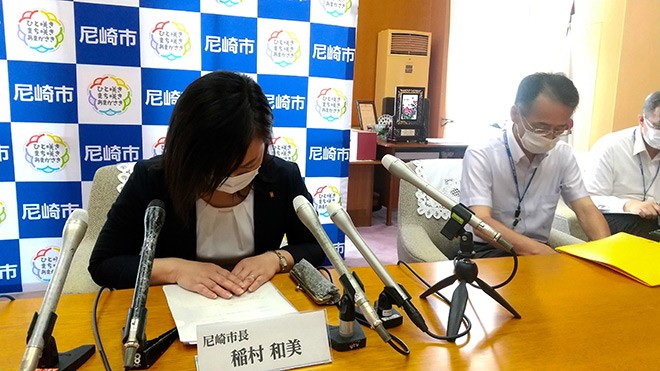 Amagasaki Mayor Kazumi Inamura apologizes at a regular news conference at the city's government building on June 23 and said, “We should have been more careful" to transfer data. She pledges to take measures to prevent a recurrence. (Kumiko Nakatsuka)

AMAGASAKI, Hyogo Prefecture--Lost USB storage devices containing personal information of all 460,000 residents in Amagasaki were found on June 24, according to Osaka prefectural police.

Police said the devices were found in the compound of an apartment building in Suita, Osaka Prefecture.

A man in his 40s reported to police that he lost a bag containing the USB flash drives on June 22, according to the police.

The man works for a company that was subcontracted by the Kansai regional branch of Biprogy Inc. in Osaka to offer COVID-19 relief subsidies to households exempt from the residence tax on behalf of the city government.

The data contained in the devices include city residents’ names, postal addresses, birthdates, how much they pay in residence taxes, and bank account information of households receiving child benefits or livelihood protection benefits.

On June 21, the employee took the devices from the municipality’s administration information center to transfer the data.

After finishing the data transfer, the employee went out drinking alcohol for about three hours at a restaurant while carrying the USB storage devices and fell asleep on the street on his way home. He later realized that the bag containing the devices was missing.

The city government said the data was password-protected or was encrypted.

It said it will investigate to see if any information was leaked with the relevant authorities.